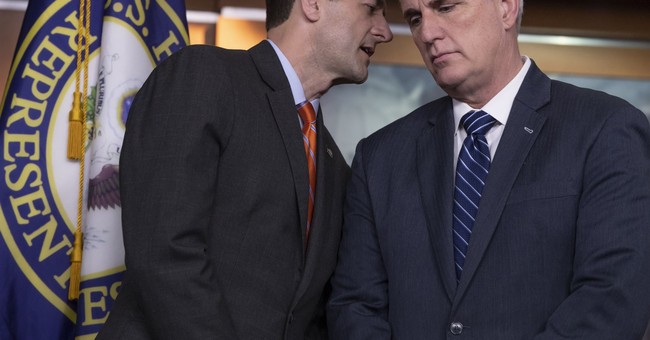 The House Freedom Caucus delivered a gut punch to Republican leadership. They voted down and killed the farm bill. The HFC, which represents the conservative wing of House Republicans on the Hill, said they’re a no-vote until immigration can be sorted out. Even a couple hours prior to the vote, House GOP leaders were hoping to contain this uprising within the ranks. Fox News’ Chad Pergram has more:

House Republican leaders are scrambling to contain an uprising in the ranks over inaction on hot-button immigration issues, with the fate of the sprawling and subsidy-packed farm bill hanging in the balance.

Passage of the farm bill remains in doubt as the conservative House Freedom Caucus threatens to withhold support without an agreement on immigration. The caucus wants a vote on a conservative bill that would boost border security and support the construction of a wall, among other changes. But those lawmakers appear to have rejected an offer by GOP leaders to consider the measure in June in exchange for support on the farm package.

Leadership, meanwhile, is hearing grief in stereo from both conservatives and moderates – who are insisting the House address protections for “DACA” recipients, young illegal immigrants who came to the U.S. as children. President Trump stripped those protections, calling on Congress to act. But the matter has been held up in court, and some moderate Republicans are trying to light a fire under House leadership to deal with the issue sooner rather than later.

All this comes as Congress is working to engineer a passable farm bill, a twice-a-decade effort that often turns into an epic balancing act to address the wishes of farm-state Republicans and Democrats supporting food stamps.

The House bill added stricter work standards for able-bodied Americans on food stamps, ordered that regulations enacted by the Obama administration over the school lunch program be revised and reviewed, gave (as always) a lot of subsidies to farmers, and added an amendment to loosen some of the sugar subsidies.

As the farm bill goes down in flames, @SpeakerRyan’s words echo in my ears: “We basically run a coalition government without the efficiency of a parliamentary system.”

As it’s always been, immigration is the thorn in the side of every political party. The issue on that, of course, is that the Democrats were given the deal of a lifetime: 1.8 million illegals legalized in exchange for border wall funding. The Democrats turned it down. And prior to that, they shut down the government over illegal aliens.