Federal Judge: Mr. Trump, You Have 90 Days To Restart DACA 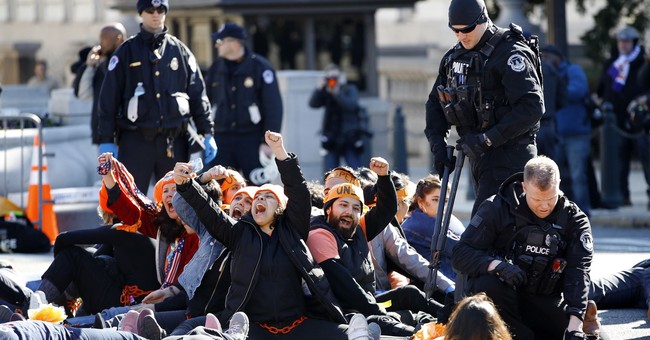 Well, the battle over what to do for recipients enrolled in the Deferred Action for Childhood Arrivals has been thrown back into the frying pan. Like crabgrass, this issue keeps arising—and causing headaches for the Trump administration. The Trump White House decided to gradually phase out the constitutionally questionable program, effectively rescinding an executive order issued by former President Obama. Yet, politically, they couldn’t leave almost one million illegal aliens subject to immediate deportation; the political consequences would be too great. So, they added in a six-month enforcement delay, affording Congress time to pass a DACA fix.

In other words, the Trump White House gave Congress time to pass the law the right way. Well, Democrats weren’t playing ball. This was the best option since close to a dozenstate attorneys general threatened to sue the Trump administration should they do nothing on DACA. White House lawyers felt rightly that they couldn’t defend the law in court. So, here we are. Failed DACA fixes, government shutdowns over illegal aliens, and Democrats turning down the legalization of 1.8 million illegals, putting them on the pathway to citizenship, in exchange for border wall funding. It’s been a whirlwind—an issue that’s been a thorn in the side of the administration. Health care is the other one. So, what’s new? Well, a federal judge says DACA has to be restarted, though he gave Department of Homeland Security three months to better elaborate on why this program should go (via NYT):

In the biggest setback yet for the Trump administration in its attempt to end a program that shields some undocumented young adults from deportation, a federal judge ruled Tuesday that the protections must stay in place and that the government must resume accepting new applications.

Judge John D. Bates of Federal District Court for the District of Columbia said that the administration’s decision to terminate the program, Deferred Action for Childhood Arrivals, or DACA, was based on the “virtually unexplained” grounds that the program was “unlawful.”

The judge stayed his decision for 90 days and gave the Department of Homeland Security, which administers the program, the opportunity to better explain its reasoning for canceling it. If the department fails to do so, it “must accept and process new as well as renewal DACA applications,” Judge Bates said in the decision.

The ruling was the third in recent months against the Trump administration’s rollback of DACA. Federal judges in Brooklyn and in San Francisco each issued injunctions ordering that the program remain in place. But neither of those decisions required the government to accept new applications.

For all the lawyers out there, feel free to chime in, but I thought the constitutionally shaky ground for DACA stemmed from the fact that the executive passed legislation. We have separation of powers; DACA crossed that line. And the notion that a succeeding president can’t rescind an executive order of his predecessor sounds ridiculous.

On The Hill, there's chatter of a new DACA fix that has the support of at least 218 members of the House, which is enough for passage. It's a way to pressure Speaker Ryan to hold a vote, which he wasn't going to do. We'll see what happens now though.