Piers Morgan: Let's Face It, We Should Take Trump More Seriously On Terrorism 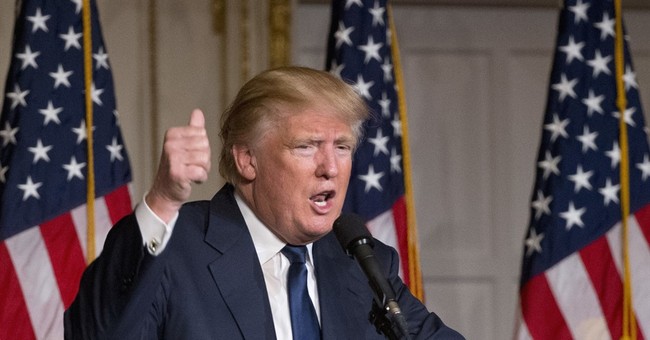 Some might find Donald Trump incorrigible, bigoted, and a total joke, but after the horrific terrorist attacks in Brussels–he’s finding a new ally: Piers Morgan. Morgan, who has known Trump for over a decade, says he’s not a racist. He’s not a fan of his politics either, but he admits that after these bombings that have left over 30 dead and hundreds wounded, and the United States’ indifference in stopping future ISIS attacks, it may be time to take the billionaire magnate more seriously on terrorism:

By coincidence, I had an interview scheduled today with the world’s most controversial man, Donald Trump, for my UK show, Good Morning Britain.

It was set up a couple of weeks ago, but the timing was eerily prescient.

I spoke to Trump for 40 minutes. He was, as you’d expect, bombastic, defiant and self-congratulatory. Why wouldn’t he be? He’s ripped up every political rulebook to take this presidential race by storm, a scenario that is hardly going to deflate the ego of New York’s most cock-sure billionaire tycoon.

But he also spoke in more detail about his plans to combat ISIS and I found myself nodding more than I expected.

Trump told me countries must tighten their borders in light of these terror attacks, especially to anyone related to an ISIS fighter in Syria.

He told me he wants law-abiding Muslims to root out the extremists in their midst, expressing his bafflement and anger that someone like Abdeslam was able to hide for so long in the very part of Brussels he had previously lived.

He told me America must make it far harder for illegal immigrants to enter the U.S. and thinks European countries should follow suit.

He told me he believes there are now areas of many major European cities which have become poisonous breeding grounds for radicalized Islamic terror.

I didn’t feel I was talking to a lunatic, as many seem to view Trump.

I saw a guy, a non-politician unfettered by PC language restraints, who is genuinely furious at the devastation which ISIS is wreaking, and seriously concerned for the security of his fellow Americans and indeed, the citizens of Europe.

Let’s be honest with ourselves, right now ISIS is winning this war and will continuing committing utter carnage on our streets on an ever graver and more barbaric scale until they are stopped.

I don’t have the answers to how to do that.

But I don’t hear any good ideas coming from any world leaders at the moment either, and it’s their highly paid jobs to work it out.

Instead, I see a global paralysis driven by fear, confusion and woeful lack of leadership.

And it will only get worse.

Hate Donald Trump all you like, but at least he seems to recognize the magnitude of the threat and at least he has firm proposals for how to try to defeat it.

Morgan isn’t the only one person who has said the real estate mogul has come off as “reasonable” in light of these attacks. CNN’s legal analyst Sunny Hostin made such remarks on The View yesterday.

Lastly, let’s not forget The New York Times piece from January that discussed Trump calling Brussels a “hellhole,” where “something is going on” to Fox Business’ Maria Bartiromo:

Warming to his theme, he added that Brussels was in a particularly dire state. “You go to Brussels — I was in Brussels a long time ago, 20 years ago, so beautiful, everything is so beautiful — it’s like living in a hellhole right now,” Mr. Trump continued.

For Belgians, already reeling from recent terrorist plots and a chronically dysfunctional government, Mr. Trump’s words were enough to induce a fit of pique worthy, in some cases, of Mr. Trump himself.

Before long, the hashtag #hellhole was gaining traction on Twitter as Belgians lashed out at Mr. Trump, deploying an arsenal of insults, irony and humor, including images of Belgium’s beloved beer and chocolate.

One Twitter user posted a picture of Mr. Trump with what appeared to be a Belgian waffle stuffed in his mouth.

“This is my hellhole,” Joseph Lemaire, a Brussels-based public relations consultant, posted on Twitter, along with several photos, including one showing the capital’s central square, the Grand Place or Grote Markt, which is flanked by stately 17th-century buildings from the city’s prosperous mercantile days.

Regardless, Trump tragically turned out to be right–and liberals need to contend with something that has always made them uncomfortable, which is that radical Islam is a threat. It’s a problem, and that spending more time demonizing people who think Islamic fundamentalism is a national security issue rather than debating how to deal with it, only accentuates their foolishness. Like so often this election cycle, Trump has surprised people.