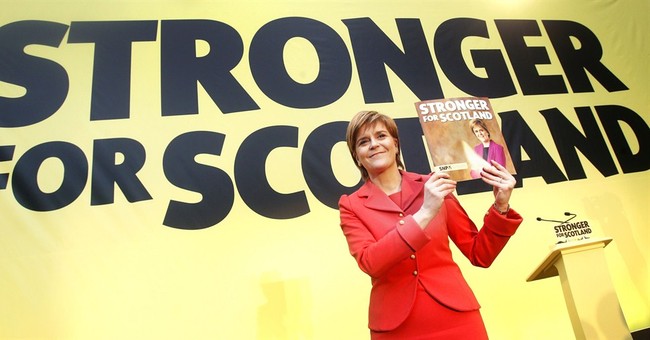 The new UK parliament is in session, and the Scottish National Party (SNP) seems to be acting more like members of Delta Tau Chi fraternity. They’re taking photographs in Westminster–which is against government policy­­–acting “boorish” and “puerile” towards other members of parliament, breaking from standard decorum of the House of Commons, like refraining from clapping, and some members even disavowed their oath to the Queen.

May 18th is when the new parliament is summoned; May 27 is the official opening, with a speech from her Majesty Queen Elizabeth II. It, of course, has Scottish National Party leader and Scotland’s First Minister, Nicola Sturgeon,

The party’s first week in Westminster was dominated not by talk of the SNP opposing Tory ‘austerity’, but by tales of members carousing in Commons bars and scoffing subsidised junk food in its restaurants. Its new intake of MPs generated further hostile news by taking ‘selfies’ in the Palace of Westminster (in deliberate breach of rules that outlaw photography there), rudely ignoring requests not to clap in the Commons chamber, and brashly evicting the Lib Dems from offices they’d occupied for more than a century.

Their second week in Westminster, which began on Monday with the election of the Commons Speaker, saw Scotland’s new lawmakers mount a bizarre effort to force 83-year-old Labour MP Dennis Skinner to give up his customary front-bench seat in Parliament.

In a further twist, the official swearing-in of new MPs descended into farce when one left-wing SNP member, Hannah Bardell, was required to take her oath twice after she ‘forgot’ to mention the Queen the first time.

Later, a colleague, Natalie McGarry, a fierce anti-monarchist, used Twitter to disown the vow she had just taken.

‘As long as in your heart and your head you believe sovereignty lies with the people, doesn’t matter what comes out your mouth,’ she declared.

These antics are hardly in keeping with the SNP’s tone during the recent election campaign, when its leader Nicola Sturgeon promised to pursue ‘grown-up politics’.

Indeed, Ms Sturgeon is understood to be deeply concerned that her new MPs are displaying what one ally calls a ‘chippy, confrontational, and at times very puerile’ attitude since arriving in Westminster.

On Thursday [May 21], someone described as a ‘senior SNP MP’ broke ranks — albeit anonymously — to warn his colleagues that their recent behaviour is giving the party a bad name.

‘Behave yourself and act like adults,’ he told fellow MPs. ‘Don’t go causing unnecessary fights. We are here to represent our constituents. It is serious business.’

‘There is a faction of the SNP, in which [MP Alex ] Salmond is prominent [ Slamond is Sturgeon’s predecessor], who believe it’s good politics to annoy the English and upset the Westminster establishment with these quite petty japes and stunts,’ says one veteran observer of the party.

‘They think Scottish voters will see it as getting one over on the auld enemy. They think it should continue indefinitely.

‘Ms Sturgeon strongly disagrees and wants MPs to concentrate on pursuing the party’s political agenda and helping their constituents. But she’s stuck in Edinburgh, 300 miles away, which makes maintaining discipline in London very tricky.’

The Mail reported that Salmond wants to go ahead with another referendum on Scottish independence, even if Prime Minister David Cameron doesn’t sanction it–a policy initiative that is stanchly opposed by Sturgeon. But, to complicate matters, the proposed referendum on the EU could have Scotland and its SNP members clamoring for another referendum more aggressively (via the Guardian):

Nicola Sturgeon is warning that there will be an “unstoppable clamour” for a second Scottish independence referendum if Scotland is taken out of the EU against its will.

In a speech in Brussels on Tuesday, the SNP leader spoke of a “groundswell of anger” and a “strong backlash” if Scotland were to be taken out of the EU by a UK-wide referendum.

During her first speech in Brussels since becoming first minister, Sturgeon insisted that “positive changes”can be made from within the existing treaty.

She emphasised the difference between the Scottish and UK governments’ stances on Europe, as the British prime minister, David Cameron, moves forward with his planned referendum on EU membership.

In an address at the European Policy Centre, the first minister highlighted the benefits that EU membership brings to Scotland, including the boost to the economy brought by the 171,000 people born elsewhere in the EU but living and working in Scotland.

Sturgeon said: “Polls in Scotland consistently show strong support for EU membership. That is why we will propose a ‘double lock’, meaning that exit from the European Union would only be possible if all UK nations agreed. That way Scotland couldn’t be forced out of the European Union against our will.”

Before the May election, Sturgeon has made it known that the SNP won’t be a “destructive force” in Westminster. At the same time, one of the party’s cornerstones is Scottish independence, which would virtually break up the United Kingdom. That doesn’t leave a lot of wiggle room for agreement, but a lot of room for the SNP to behave as they have thus far.

Also, the EU question is one that divides UK Conservatives down the middle. It hobbled the last Conservative majority government under John Major in the 1990s; it could do so again for Cameron. Like Major, Cameron has a razor thin majority.