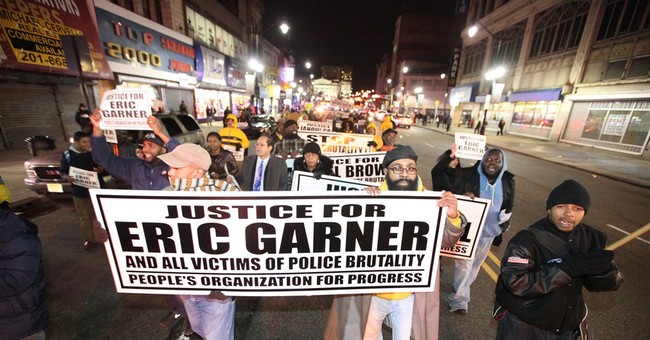 In the aftermath of the Garland shootings in Texas, ISIS has come the United States. Blessedly, no one was killed, except for the two would-be attackers who sought to kill attendees of a Muhammad cartoon drawing contest hosted by Pamela Geller, blogger and President of the American Freedom Defense Initiative. Now, while the media frivolously tries to say how hate speech ? free speech–let’s not forget that it’s the police who you should be truly worried about, or at least; that’s what the newsrooms of the Big Three think. The Media Research Center analyzed media coverage for the entire month of April from the Big Three–ABC, NBC, and CBS–and found that these networks devoted 6x more coverage to alleged instances of police misconduct than the terror activities of ISIS. And, yes, the Islamic State been busy trying to recruit Americans, Brits, and other nationals to carry out terrorist attacks, along with getting their luxury hotel in Mosul ready for business:

In the month of April, according to a new survey by the Media Research Center, allegations of police misconduct accounted for one out of every seven minutes of broadcast evening news airtime, or 3 hours, 43 minutes.

The NBC Nightly News devoted the most airtime to the topic of police misconduct (1 hour, 27 minutes), followed by the CBS Evening News and ABC's World News Tonight (1 hour, 8 minutes and 1 hour, 5 minutes, respectively).

Protests over the death of Freddie Gray in police custody, including the subsequent riots in Baltimore, attracted the most coverage, with 1 hour, 48 minutes of broadcast airtime. The shooting of a suspect by a Tulsa reserve deputy garnered 29 minutes of airtime, followed by the videotaped shooting of a fleeing suspect by a South Carolina police officer (24 minutes).

Despite the relative lack of network news interest, there was no shortage of news involving ISIS during the month of April. On April 2 and 3, three American women were arrested for trying to join ISIS; later in the month, more U.S. and British citizens reportedly tried to join ISIS. On April 16, NBC reported an Ohio man had returned to the United States after receiving terror training from ISIS.

Of course, the police are not as big a threat as ISIS, though Nebraska State Sen. Ernie Chambers might disagree. Regardless, while instances of alleged police misconduct are newsworthy given the events in Ferguson and Staten Island, threats to national security rank just as high in terms of importance. It should be interesting to see how the media continues to cover ISIS–and other terrorist threats–as 2016 approaches given that trust on foreign policy has swung back to the Republicans. The rise of ISIS is what tipped the balance in favor of now-Sen. Thom Tillis (R-NC), who booted then-Sen. Kay Hagan (D-NC) in the 2014 midterms; Hagan came under fire when she admitted she skipped a classified Armed Services Committee hearing on ISIS to attend a fundraiser in New York.

It’s unknown if the “security moms” are back. If they are, it’s unknown if they’ll break for Hillary. The 2016 election is shaping to be potentially more focused on foreign policy than usual. At the same time, it’s not like the former would get much coverage either. It goes against the grain of the Sisterhood of the Traveling Pants mantra Team Clinton will surely play up when election season gets more intense.