What Happened To Freddie Gray? 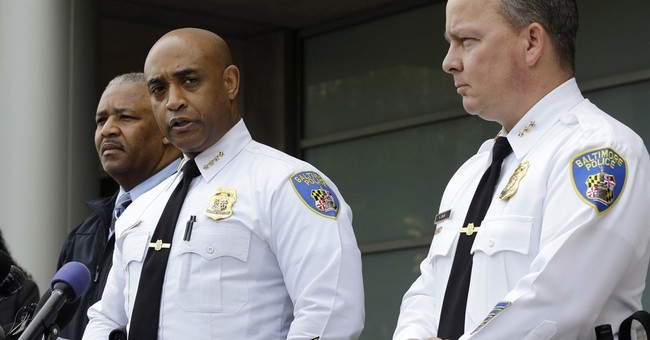 With order restored in Baltimore, the city can focus on rebuilding and return to investigating the event that caused the city to explode over the past couple of days: the death of Freddie Gray.

On April 12, Gray was arrested after a foot pursuit. The official reason isn’t known, but the fact that he fled police rose suspicions in a neighborhood known for drug dealing. After being placed in a police van, the next 45 minutes are rather a mystery. What we do know is that Gray received a fatal spinal injury sometime during the day, slipped into a coma, and died a week later (via The Baltimore Sun):

The reason Gray was chased by police remains unclear. Police have said it came in part because he ran, raising officers' suspicions in an area known for drug dealing. A police report on the arrest states that Gray "fled unprovoked" and that an illegal switchblade knife was later found on him but provides no other reason for the pursuit. Neighborhood accounts vary on where Gray ran before reaching Presbury Street and being apprehended by police. Washington said Gray dipped into "the cut" just south of West North Avenue, an alley that breaks into several directions in the center of a partially boarded-up block of rowhouses. It's a place strewn with broken liquor bottles, adjacent to backyards where dogs still keep watch.

Others say Gray ran straight south down Mount Street. Deputy Commissioner Kevin Davis said Friday that one officer on foot and two on bikes chased Gray "through several streets, several housing complexes," before arresting him. "It's a foot chase and it's a long one."

At 8:42 a.m., police requested a transport van at the scene. At that point Gray, who had asthma, asked for an inhaler, but Moore said police ignored the request. Batts has said Gray's trouble breathing was not given the proper attention at "one or two" of the van's subsequent stops.

One block south and four minutes later, at 8:46 a.m. at Mount and Baker streets, the van stopped because Gray was acting "irate," police said. Police have also said that paperwork had to be filled out, though they have not provided more detail. Gray was taken out of the van so officers could place leg shackles on him. Police have said he was not buckled into the van with a seat belt afterward, even though that is required by department policy.

Shouts at the scene brought Tobias Sellers and others running down the street.

Sellers, 59, who is Booze's brother and lives on the same block, said he was among those who started moving toward Gray, and saw police beating him. "They were taking their black batons, whatever they are, and hitting him," Sellers said.

At 8:59 a.m., as the van headed toward Central Booking, the driver called for an officer to "check on" Gray.

Police said an officer did respond and had "some communication" with Gray at the intersection of Druid Hill Avenue and Dolphin Street, though they have not described that interaction in detail and have said there is no surveillance footage. Batts said officers called to the van had to "pick [Gray] up off the floor and place him on the seat," but he declined to elaborate.

Deputy Commissioner Jerry Rodriguez said police still need to determine what Gray's condition was at the intersection and whether the police response during the encounter was appropriate.

During the Druid Hill and Dolphin stop, a call came through asking the van driver to return to the 1600 block of W. North Ave. — not far from the spot where Gray and police first made eye contact — to pick up another person. Such vans are divided by a metal barrier, and the second person was loaded into the section of the van not occupied by Gray. Police have not described any interaction with Gray at this location. They have declined to identify the second person placed in the van, saying they need to "protect the integrity" of the criminal investigation into Gray's death, in which that person is now a witness.

After the pickup, the van headed south again — but this time it was headed for the Western District police station rather than Central Booking. When Gray was taken out of the van, Rodriguez said, "he could not talk and he could not breathe."

Beyond damage to his spinal cord, Gray had a crushed voice box.

At 9:24 a.m., officers called a medic to the Western District station, reporting that Gray was in "serious medical distress." The Baltimore Fire Department said the call arrived at 9:26 a.m.

Paramedics responded, spent 21 minutes treating Gray at the station, and arrived at Maryland Shock Trauma Center — where Gray would fall into a coma and die a week later — at 10 a.m.

The Sun added eyewitness accounts, which clearly showed that Gray was in some form of physical distress.

"They had him folded up like he was a crab or a piece of origami…He was all bent up," said Kevin Moore, who witnessed Gray’s arrest.

"They lifted him up by his pants, and he wasn't responding, and they threw him in that paddy wagon…it wasn't like they took him out to see what was going on with him. … I said, 'Call the paramedics!” said Jacqueline Jackson who lived near Mount and Baker streets.

The publication added that six officers–Lt. Brian Rice, Sgt. Alicia White, Officers William Porter, Edward Nero, and Caesar Goodson Jr.–have been suspended. Five of the officers have provided statements; we do not know which one decided to abstain.

Police have handed their Freddie Gray investigative files over to prosecutors a day earlier than planned, police officials said Thursday, adding that newly discovered evidence in the case indicates the transport van made a previously unreported stop before delivering Gray to the precinct.

Following the announcement, the state's attorney for Baltimore confirmed she had received the report and said that while police have regularly briefed her office on their findings, her team has been conducting its own independent probe into Gray's April 19 death after his arrest a week earlier.

The new stop, which "was discovered from a privately owned camera," Davis said Thursday, came between the first and second stops.

Over at the Washington Post, the prisoner that was picked up noted that Gray might have been trying to hurt himself “banging against the walls.” Additionally, the reports that Mr. Gray had a pre-existing spinal injury before his arrest turned out to be false.

This incident deserves an investigation. For goodness sake, the timeline is incomplete. We have a clearer picture of those missing 45 minutes that led to Gray’s death, but it’s not yet verified. Moreover, the Baltimore Police Department has had its share of incidents involving excessive force and civil rights violations. Since 2011, there have been 317 lawsuits filed against the city - 100 of them have been settled. Between 2011-2014, Baltimore doled out $5.7 million to alleged victims of police brutality, according to Business Insider. The comments from those who settled with the city will never be printed; it’s part of the agreement they signed with Baltimore City.

Now, it’s not as if the city’s police are incompetent. The city saw a dramatic drop in crime between 1999 and 2009, but the number of lawsuits and settlements in that short four-year window means authorities cannot ignore this Gray incident, nor should they sweep it under the rug. Concerning urban investment, the Sun noted that the $5.7 million the city spent to these reported victims of police brutality could have renovated 42 playgrounds, resurfaced 72 basketball courts, or hired 124 additional police officers. Lastly, the Strategic Report on how the Baltimore Police hold officers accountable isn’t a particularly good assessment:

The agency’s strategic plan, released late last year, said discipline “has not always been a priority for the Baltimore Police Department,” and it has been common “for cases in this department to take as many as three years to resolve.” A more recent consultant’s report on the Internal Affairs Division said detectives lack training and often take shortcuts when investigating officers suspected of misconduct.

Many complaints have focused on the Violent Crimes Impact Section, which had more than 260 officers in 2012. City Council members and community activists said those officers used heavy-handed tactics and had no accountability.

In addition to the allegations of excessive force, officers in the unit were accused by prosecutors of lying on a search warrant and working to protect a drug dealer in order to make arrests. One received six months of home detention; the other went to prison for eight years for protecting the drug dealer.

In September 2012, the unit sparked outrage when a detective threw Anthony Anderson, 46, to the ground during a drug arrest. Anderson’s spleen ruptured, and he died a short time later.

The state medical examiner’s office said the death was a homicide caused by blunt force trauma. But Baltimore State’s Attorney Gregg Bernstein declined to bring charges, ruling that the officers did not use excessive force and followed police guidelines. The family filed a federal lawsuit, alleging that three detectives kicked Anderson for several minutes; the case is ongoing.

Batts disbanded the Violent Crimes Impact Section in December 2012 in response to complaints and created the Special Enforcement Section to address spikes in serious crimes. The unit has about 130 officers.

Regardless of the misconduct and scandal that has plagued the Baltimore Police Department, that doesn’t give citizenry the license to riot, loot, vandalize, and set structures aflame. If anything, that only makes the situation worse since officers have an obligation to bring order back to the city. They will use everything in the arsenal to do so–and they should.

The Freddie Gray incident deserves an investigation, but a riot during the process doesn’t help anyone, especially the Gray family who looked beside themselves as the city burned earlier this week.