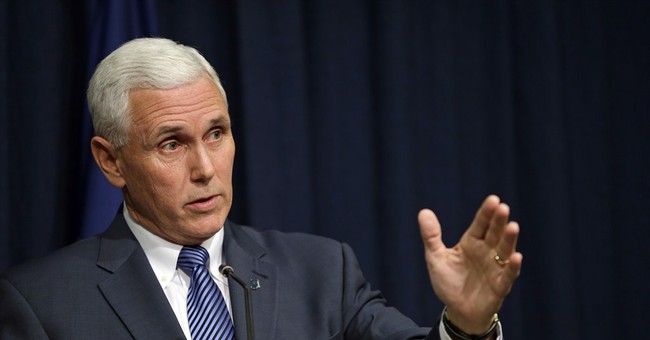 Earlier this week, Indiana Gov. Mike Pence signed into law a religious freedom bill that some think is discriminatory, and could lead to businesses being allowed to refuse service to gay and lesbian customers.  The governor soon found himself under siege by nearly 3,000 angry protestors, according to The Hill. The publication also reported businesses voicing their opposition to the measure, with Apple CEO Tim Cook tweeting his “disgust” over the law. Yelp proposed that businesses boycott the state, and said it had cancelled all of its travel there. Angie’s List’s CEO said he plans to cancel a $40 million expansion to their headquarters in Indianapolis, cannibalizing 1,000 jobs over five years in the Eastside neighborhood. Oh, and Miley Cyrus called Gov. Pence an “a**hole,” which perfectly captures the hyper- emotionalism exuded by the left that often leads to them taking positions that seek to kill the debate.

Let’s go through the some of the facts about this bill. For starters, 40 percent of U.S. states have similar laws (via WaPo):

Indiana is actually soon to be just one of 20 states with a version of the Religious Freedom Restoration Act, or RFRA, according to the National Conference of State Legislatures. Here are those states, in dark teal:

Forty percent of U.S. states have something similar to Indiana, as does the federal government.

The Washington Post also mentioned that President Bill Clinton signed into law the Religious Freedom Restoration Act … in 1993. It was introduced in the House of Representatives by then-Congressman Chuck Schumer (D-NY). By a voice vote, it passed the House. Then, it worked its way to the Senate, where members voted 97-3 in favor of the law. I’m going to bet that these protestors won’t be showing up at Bill Clinton’s residence, or any of the member of the U.S. Senate–current and former–who voted in favor of the bill, to voice their outrage.

This ignorance of the law was exuded during the Hobby Lobby case last summer. Also, it’s worth noting (again) that RFRA isn’t a “blank check” to discriminate.

(a) IN GENERAL- Government shall not substantially burden a person’s exercise of religion even if the burden results from a rule of general applicability, except as provided in subsection (b).

(1) is in furtherance of a compelling governmental interest; and

(2) is the least restrictive means of furthering that compelling governmental interest.

Looping back to Hobby Lobby, Bloomberg’s Megan McArdle had a great post noting that there’s–you know–a process to determine if one’s religious beliefs are genuine [emphasis mine]:

1) What can stop a company from arguing that it is against the owner's sincere religious beliefs to pay workers a minimum wage?

The Religious Freedom Restoration Act is not a blank check to religious groups to do what they want. The law says that the religious belief must be sincerely held, and also that the government can burden the exercise of that belief if it has a compelling state interest that cannot easily be achieved in any other way. That's why no one has successfully started the Church of Not Paying Any Taxes, though people have been trying that dodge for years.

2) How can we tell if a belief is sincere?

Hobby Lobby closes its stores on Sundays and otherwise demonstrates a pretty deep commitment to fairly stringent Christian values, of which opposition to abortifacients is often a part. There will always be some gray area, of course, that allows people to claim special treatment for spurious beliefs, but the government has done a fair job over the decades of sorting out genuine beliefs from obvious attempts to dodge the law. Hobby Lobby seems to fall pretty squarely within the "sincere belief" camp.

To further quell the left's hysteria over this law, here is a pro-gay rights law professor, Daniel O. Conkle, writing for USA Today on why Indiana needs RFRA [emphasis mine]:

I am a supporter of gay rights, including same-sex marriage. But as an informed legal scholar, I also support the proposed Indiana Religious Freedom Restoration Act (RFRA). How can this be?

The bill would establish a general legal standard, the "compelling interest" test, for evaluating laws and governmental practices that impose substantial burdens on the exercise of religion. This same test already governs federal law under the federal RFRA, which was signed into law by President Bill Clinton. And some 30 states have adopted the same standard, either under state-law RFRAs or as a matter of state constitutional law.

Applying this test, a unanimous U.S. Supreme Court recently ruled that a Muslim prisoner was free to practice his faith by wearing a half-inch beard that posed no risk to prison security. Likewise, in a 2012 decision, a court ruled that the Pennsylvania RFRA protected the outreach ministry of a group of Philadelphia churches, ruling that the city could not bar them from feeding homeless individuals in the city parks.

If the Indiana RFRA is adopted, this same general approach will govern religious freedom claims of all sorts, thus protecting religious believers of all faiths by granting them precisely the same consideration.

But granting religious believers legal consideration does not mean that their religious objections will always be upheld.

In any event, most religious freedom claims have nothing to do with same-sex marriage or discrimination. The proposed Indiana RFRA would provide valuable guidance to Indiana courts, directing them to balance religious freedom against competing interests under the same legal standard that applies throughout most of the land. It is anything but a "license to discriminate," and it should not be mischaracterized or dismissed on that basis.

Keep in mind; Conkle also noted that the courts, even in states with RFRA statutes, have rejected recent claims of religious exemptions amongst marriage-related businesses. But also said that those who disagree with gay marriage should have their day in court.

The position that wedding-related businesses having the right to refuse service to gay and lesbian customers based on religious grounds is popular. While a plurality of Americans support gay marriage, they also support religious protections for those who disagree, as the Associated Press-Gfk poll showed in February. Though, if you head over to Gallup, you’ll find that a solid majority support gay marriage.

Then again, the former finding is not surprising; it’s the 57 percent figure in AP’s poll that show Americans support gay marital rights, but also religious freedom.

In short, this faux outrage is grounded with folks who didn’t get the memo. Actually, it’s probably folks who refuse to read the memo. A Democrat proposed the Religious Freedom Restoration Act and it was signed into law by a Democratic president. It’s a 22-year old law! Forty percent of U.S. states have adopted RFRA-based laws, and it’s not a “blank check” to discriminate given that there is a high threshold in determining genuine religious beliefs in satisfying a compelling government interest, and making sure the latter is honored in the least intrusive way possible.

Nevertheless, this silliness has forced Gov. Pence to discuss a “clarification” bill with legislators over the weekend.

UPDATE: Seattle Mayor bans municipal workers from traveling to Indiana on city funds. Yet, it appears his state has RFRA statutes

@mVespa1 yet his state has RFRA protections via court decision pic.twitter.com/YVcPIpAXd8

UPDATE: Then-State Senator Barack Obama voted for RFRA in Illinois, which the White House did not refute (via Weekly Standard):

The Religious Freedom Restoration Act was signed into federal law by President Bill Clinton more than 20 years ago, and it lays out a framework for ensuring that a very high level of scrutiny is given any time government action impinges on the religious liberty of any American," Pence said. "After last year's Hobby Lobby case, Indiana properly brought the same version that then-state senator Barack Obama voted for in Illinois before our legislature."

This Week Host George Stephanoplous later asked White House press secretary Josh Earnest to respond to Pence's claim: "Josh, you just heard the governor say right there this is the same law, he says, that Barack Obama voted for as a state senator back in Illinois."

Earnest didn't dispute the Indiana governor's statement. "Look, if you have to go back two decades to try to justify something that you're doing today, it may raise some question about the wisdom of what you're doing," Earnest said.

UPDATE: Via Allahpundit: Here's the video of Clinton signing RFRA in 1993.

UPDATE: Via HRC: Illinois has a public accommodation law that prohibits discrimination by sexual orientation from private businesses and government entities "that provide services to the general public."  Yet, only 21 states have such accommodations. Again, why is this bill controversial? If this law permitted a "blank check" on discrimination, which it does not, it would've happened in Indiana and elsewhere long ago, as Ace of Spades' Gabriel Malor points out.

Twenty-one states have public accommo protections for gays. Additionally, some localities have such ordinances. Everywhere else, nope.

Which is why it's hard to imagine the parade of horribles conjured by IN RFRA opponents. You'd think if it happened, it would have already.

RFRAs aren't a free-license-to-discriminate card. It creates a balancing test, weighing on a case-by-case basis interests of both sides.