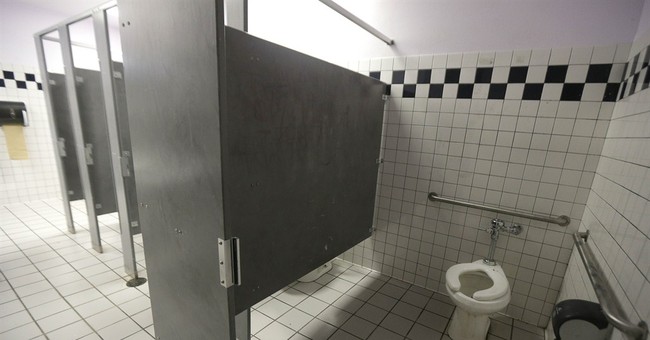 All I can say is that I’m thankful I’m covering the Franklin Center’s school choice conference in Alexandria, Virginia, rather than the House Democratic Retreat in Philadelphia. The press has described “police state” conditions, where Capitol Police and Democratic staffers were unusually heavy handed with reporters responsible for covering Capitol Hill. Reporters in need of the restroom facilities were escorted, and barred from entering the hotel except for the scheduled events. But, bathroom buddies for the press? (Via Politico):

Reporters are being escorted to and from the restroom and lobby and are being barred from entering the hotel outside of scheduled events, even if they've been invited by a member of Congress.

During Vice President Joe Biden’s remarks at the retreat Friday, reporters were required to have a staff member, usually a junior member of the press team, escort them when going to the bathroom or to the lobby. The filing center for reporters was at a separate hotel from where the retreat was taking place, so access was limited to members of Congress specifically made available to the press.

“It was a police state. It was absurd how heavy handed the capitol police and Democratic staff were in trying to control everywhere the press went,” New York Times reporter Jeremy Peters said in an interview.

Peters said at one point he was also barred from entering the hotel where the retreat was taking place, despite the fact he had an invitation to eat breakfast with a member of Congress.

“I was an invited guest into this hotel, into the restaurant of the hotel. The staff from the Democratic caucus refused to let me into the hotel, and the Capitol Police told me to leave, even after the congressman went to them and said 'no, he is my invited guest,'" Peters said.

Peters said he was told by a staffer they were being escorted to prevent them from talking to members of Congress.

Amy Chozick, also of The New York Times,  noted that such events always had security, but the stringent limits placed on the press were instituted when Hillary’s possible 2016 bid became a point of interest. Still, as in her case, it’s incredibly awkward that a staffer waited outside the stall as she used the bathroom.