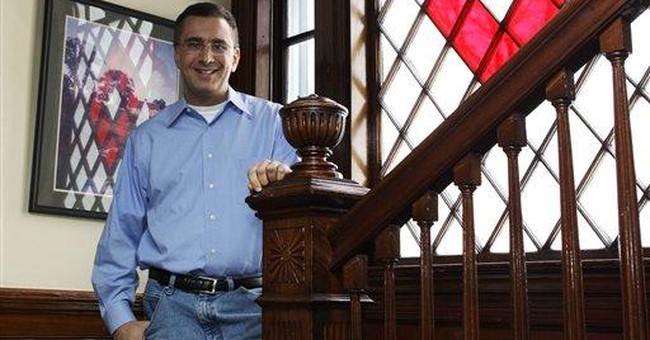 Guy and Katie have been covering the fiasco regarding MIT professor Jonathan Gruber who said repeatedly that Obamacare’s passage relied on “the stupidity of the American voter” and a “lack of transparency” to get it through Congress.

As the firestorm grew, Democrats began to distance themselves, or outright deny ever knowing Gruber, like Nancy Pelosi did, in order to prevent what’s quickly becoming a public relations nightmare.

At the conclusion of the G20 Summit in Australia, President Obama commented on the controversy by saying, “The fact that an adviser who was never on our staff expressed an opinion that I completely disagree with in terms of the voters is not a reflection on the actual process that was run."

OK, Gruber wasn’t on staff, but he certainly was an architect of the law (via Reason):

Yes, Gruber was an adviser, as Obama describes him, but that significantly understates his role. In addition to the nearly $400,000 he received from the administration (more than Obama's senior staff earns annually), his work was cited repeatedly by the administration as evidence for the law, and Gruber participated in high-level discussions with the president himself about what policies the law should include.

When the bill was being scored by the Congressional Budget Office, Gruber was one of just three outside economists summoned to an Oval Office meeting with the president and CBO director Douglas Elmendorf to look for ways to adjust the law in order to receive a better score, according to The Washington Post. That discussion, Gruber later said in a 2012 PBS documentary on the creation of the law, "became the genesis of what is called the Cadillac tax in the health care bill." Gruber also visited with senior administration officials at the White House on several other occasions, according to visitor logs.

The White House relied on Gruber not only to help determine policy, but to make the case for why it would work. In November of 2009, as Obamacare was being debated, the White House touted a report produced by Gruber as an "objective" analysis of the law—failing to mention that he had been paid by the administration.

And then there was the time in 2006 when, as a senator, Obama said he’d "stolen ideas" from Jonathan Gruber—in Obama's words, "liberally."

And, he did spend quite a bit of time at the White House when Democrats were drafting the new law (via WSJ):

Jonathan Gruber, the economist at the heart of a fresh debate about the Affordable Care Act, has had more than a dozen appointments to visit the White House since Democrats began drafting the health law in 2009, records show.

The visits included at least one group meeting with President Barack Obama, as well as appointments with senior administration officials who helped shape the 2010 law that expanded health insurance to millions of Americans.

Mr. Gruber went to the White House at least six times in 2009, according to a review of visitor logs. He met with the president on July 20, 2009, and was joined by other economists. Some of the other meetings were held with Jeanne Lambrew, deputy assistant to the president for health policy, and Peter Orszag, former director of the Office of Management and Budget.

Mr. Gruber visited the White House at least twice in 2010 and met with Jason Furman, who is now chairman of the president’s Council of Economic Advisers. Mr. Gruber meet with Ms. Lambrew at least twice this year and was at the White House as recently as June, the records show. For five of the meetings, visitor records don’t show when Mr. Gruber arrived or departed, making it unclear whether the appointments were kept.

Mr. Gruber wrote a 2011 cartoon book called “Health Care Reform” that aimed to explain the federal law. A note about the author says Mr. Gruber “consulted extensively with the Obama administration and Congress during the development” of the law.

For a random adviser, Gruber sure spent a lot of time hanging out in Obama's highly restricted neighborhood. pic.twitter.com/cQWnEGsdQU

Last note on the attempted distancing, here’s a video that pretty much makes that liberal maneuver virtually impossible: