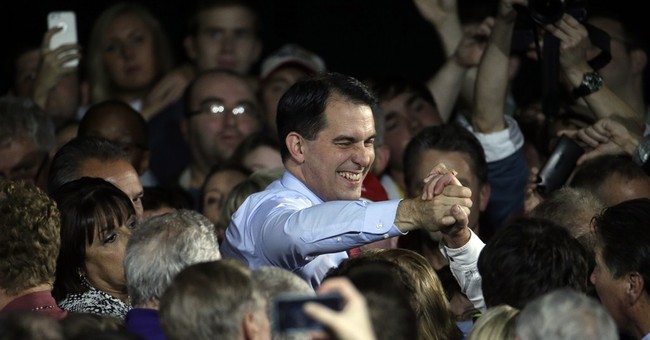 Politically, are labor unions finished? It appears that might be the case. Republican Wisconsin Gov. Scott Walker once again humiliated organized labor with his comfortable re-election last Tuesday. While polls showed a close race, Walker beat his Democratic opponent, Mary Burke, by a 6-point margin 52/46.

Labor unions had put Walker in the cross hairs ever since his 2010 gubernatorial victory, failed to oust him in the 2012 recall (Walker received more votes in this election than in the 2010 race), and came up short again in this contest.

Walker is now a definite 2016 contender, with a reputation of being unbeatable given the political environment that he presides in, but what do labor union attribute to their serial failure to get rid of this guy; it’s the Koch brothers (via Politico):

What the labor movement now has to ask itself is: How could it lose three times — in 2010, a 2012 recall vote and now in Walker’s 2014 re-election — to the nation’s most blatantly anti-union governor? How especially in Wisconsin, cradle of the early 20th-century Progressive movement and birthplace of public-sector unionism? If not here, where?

Much of the answer, as Trumka’s statement suggests, is that labor simply can’t match the financial resources available to Walker through the Koch family and other pro-business allies. But another part of the answer is surely labor’s inability to break free of a decades-long steep decline that prompts many of its natural allies to judge it politically irrelevant.

Of six anti-labor governors the AFL-CIO targeted for defeat earlier this year, Walker occupied pride of place. “It’s not been tough for us to get volunteers in Wisconsin,” Trumka boasted late last month on MSNBC. “He’s sort of like the poster child of that across the country.”

Walker was labor’s public enemy No. 1 practically from the moment he was elected. He stunned public employee unions a month after the election when he said that weakening them was essential to bringing state spending under control. He was looking, he said, at anything from outright decertification to various “modifications of the current laws in place.”

Then again, Trumka also predicted Alison Lundergan Grimes would beat Mitch McConnell. That race ended up being a blowout, where Grimes was slaughtered by the soon-to-be Senate Majority Leader 56/41.

So, it’s probably not prudent to look into Trumka’s crystal ball when it comes to elections.

Also, the Koch brothers, again; yes, Americans for Prosperity was projected to spend at least $125 million on the 2014 midterms, but one donor alone–Tom Steyer–blew $73 million on progressive candidates.

And, when you go the OpenSecrets, there are a lot of labor unions on the top donor lists for 527 groups and organizations.

Also, when you have a candidate who runs on her corporate bona fides only for the electorate to discover that she was reportedly fired by her own family for incompetence, that’s not dark money’s fault; that’s just bad candidate vetting.