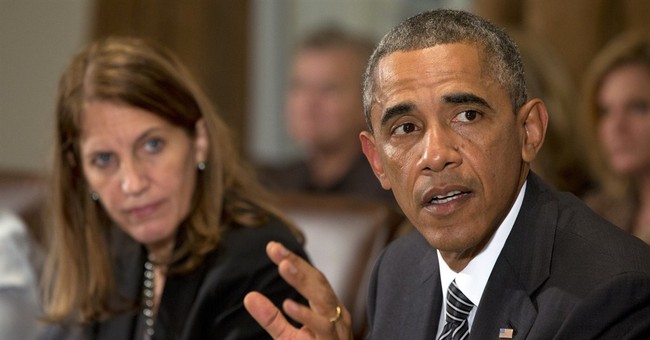 “Republican cuts kill;” that’s an ad run by the Agenda Project Action Fund. Of all the things in the world, liberals have decided to politicize a deadly, incurable infectious disease to attack Republicans. Guy and Katie have written about the absurdity of this claim; even the Washington Post gave it four pinocchios:

This ad is simply a more extreme version of a new Democratic talking point — that GOP budget cuts have harmed the nation’s ability to handle the Ebola outbreak. It mixes statistics — the budget for the Centers for Disease Control and Prevention (CDC) “cut” $585 million (the ad offers no date range) — with disturbing images of the outbreak and various Republican leaders saying variations of the word “cut.”

On many levels, this line of attack is absurd.

Obama’s Republican predecessor oversaw big increases in public-health sector spending, and both Democrats and Republicans in recent years have broadly supported efforts to rein in federal spending. Sequestration resulted from a bipartisan agreement. In some years, Congress has allocated more money for NIH and CDC than the Obama administration requested. Meanwhile, contrary to the suggestion of the DCCC ad, there never was a specific vote on funding to prevent Ebola.

If we are going to talk about spending, let’s bring in the CDC’s priorities, like why has more money gone to the “community transformation grant program” than programs that help fight and prevent infectious diseases. Also, as Guy wrote:

Republican budget "cuts" simply slow down the overall rate of spending increases. Even the dreaded sequester -- which was President Obama's idea, changes to which he vowed to veto -- barely dented spending at all. Reason's Nick Gillespie has an excellent post full of facts and charts to refute the DEADLY CUTS! hyperventilating. To put things in perspective, President Clinton's last budget (FY 2000) called for $1.77 trillion in federal spending. A decade-and-a-half later, we're steadily marching toward $4 trillion in outlays, having accrued well over $17 trillion in debt, with tens of trillions more looming in unpaid-for promises. The notion that the federal government is spending every single one of those dollars responsibly is laughable. The federal budget is rife with waste, inefficiencies and reckless long-term math. John Hayward's apt summary: "We don't have an under-funded government. We have a bad government." Republicans are right to fight for needed reforms and restraint -- and doing so does not entail far-fetched side effects such as aiding and abetting Ebola. And by the way, if that insane Ebola ad reminds you of this startling smear of Paul Ryan in 2011, it might be because both spots were produced by the same group.

So, let’s play by Agenda Project's rules for a second. Do they think cutting $72 million from the CDC for public health preparedness and response is a rational move? If not, they have to call the Obama White House to find out why they proposed such cuts in their 2012 budget (via Daily Caller):

Obama’s original budget plan for fiscal year 2012 cut funding for a CDC public health emergency preparedness program by $72 million. The proposed cuts would have taken money away from municipal and state health departments to hire health workers and monitor for public health hazards and disease outbreaks.

In the end, both the White House and GOP budget plans failed, but the Obama administration seemed content with cutting some funds from the CDC.  Now, in the end, both GOP and Obama budgets plans failed and sequestration was a bipartisan agreement, so one must wonder how the Agenda Project put this this Republicans=death narrative together.  Frankly, I wouldn't waste your time on it.

Hopefully, this sort of overreach will kill future attack ads of this nature on both sides.