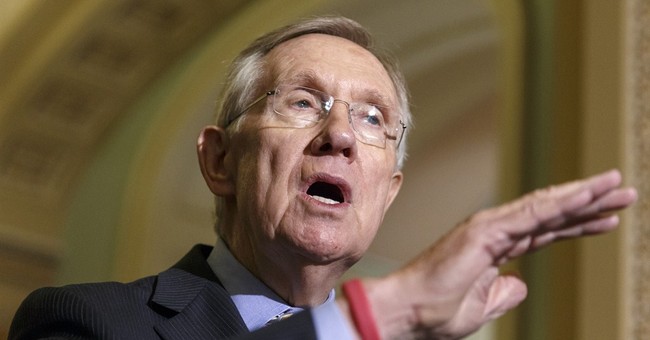 Senate Majority Leader Harry Reid is simply living in an alternate universe. While yelling into the clouds over the Koch Brothers’ evil plot to destroy America, he said today that Democrats “are doing really well in Montana.” And is optimistic that they'll maintain control of the Senate (via the Hill):

Reid predicted Democrats would lose a seat in South Dakota, but was optimistic about Montana despite Sen. John Walsh's (D-Mt.) recent decision to drop out of the race after a plagiarism scandal. We are doing really well in Montana," Reid told reporters on Monday.

If the election were held today, we'd be in the majority without any question, but the election is not today," said Reid, who argued "it's not going to be easy" for Republicans to win the Senate.

Of those two races, Reid added, “we are holding our own.”

In both Georgia and Kentucky, Republicans David Perdue and Senate Minority Leader Mitch McConnell are leading. Georgia Democratic Senate candidate Michelle Nunn had the unfortunate mishap of having campaign memos leaked, which described her as a “lightweight, too liberal, and not a real “Georgian.” Oh, and those critiques are by her own staff. Her Republican opponent, David Perdue, leads with a comfortable seven-point lead, according to Insider Advantage’s poll.

In Kentucky, the race is going to be a tight one for Mitch McConnell, who’s battling for his political life, but even Huffington Post pollsters give him the advantage in that contest against Democrat Alison Lundergan Grimes, who infamously said that Israel’s Iron Dome missile defense system protects Israelis from Hamas’ underground tunnels.

McConnell’s campaign has worked hard to define Ms. Grimes, flooding the Bluegrass state with negative ads calling her “Barack Obama’s Kentucky candidate” and saying she supports “Barack Obama's anti-coal environmental platform,” according to the Wall Street Journal. And, they're working:

Those ads are having an impact. In a July poll sponsored by local media outlets, 33% of voters viewed her negatively, up from 27% in May, while the share of voters who view her positively, which was higher, stayed relatively flat.

In an interview, Ms. Grimes said she has attempted to spend time with people in Kentucky, not "pandering to the press."

"We are no better off for having Mitch McConnell there," she said, referring to his seniority in Washington. "It's not about the lines on a résumé. It is about the passion that you have to work in a bipartisan manner to put the people of this state first."

At the same time, McConnell isn’t doing too badly in the latest Bluegrass poll. He’s virtually tied with Grimes amongst women voters (46/47) and he’s winning the youth vote–those between the ages of 18 and 34–(49/44) over Grimes. Additionally, the poll finds that 27% of likely African-American voters would vote for Mitch McConnell.

As for Ms. Grimes slamming of McConnell’s service in the Senate, She does know that Democrats have been in the majority for the past eight years, right?. And since 2008, the working class of America has seen their average incomes drop by 6.5%, African-American median incomes falling by 9.5%, and Hispanic income dropping consistently every year since the 2008 presidential election, according to WPA Research.

That’s not a shining statistic if you’re running as a Democrat.

In Georgia, the FiveThirtyEight projection is far more pessimistic about Democratic prospects than the polls. Here’s why: No Democrat holds an elected statewide office in Georgia. No Democrat has won a U.S. Senate race in the state in 14 years. No Democrat has won a presidential race in the state in 22 years. The Democratic candidate, Michelle Nunn, is probably benefitting from name recognition; her father, Sam Nunn, was a well-regarded senator from the Peach State. That edge may disappear once voters realize Michelle is not Sam. Moreover, Republicans may coalesce around the winner of the contentious GOP primary between Jack Kingston and David Perdue.

Kentucky is a similar case — the polls show a Democrat holding her own a in a deeply red state. But Senate Minority Leader Mitch McConnell, a Republican, has all the fundamentals going for him: President Obama is deeply unpopular in Kentucky, McConnell is an incumbent, and Democrats haven’t won a statewide federal race in Kentucky in 18 years. They haven’t won a Senate race in 22 years. In May, I estimated that these factors knocked down Democrat Alison Lundergan Grimes’s chances of winning by nearly 30 percentage points, from the low 40s into the teens.

Enten described Senate Democrats’ position in the 2014 elections as “perilous,” saying, “A tiny shift could tip the canoe and spill a lot of Democrats overboard.”

As for Colorado, need I say more about the candidate who even Montana Democrats say doesn’t “have a chance in hell?”

Granted, Reid is part of the Democratic leadership going into an election cycle hostile to his party. He needs to be Mr. Positive, the guy who keeps the liberal base at ease. In 2010, then-Speaker Nancy Pelosi filled this role when she said Democrats would maintain their majority in the House, despite the red tsunami that washed 63 of them out of office that November.