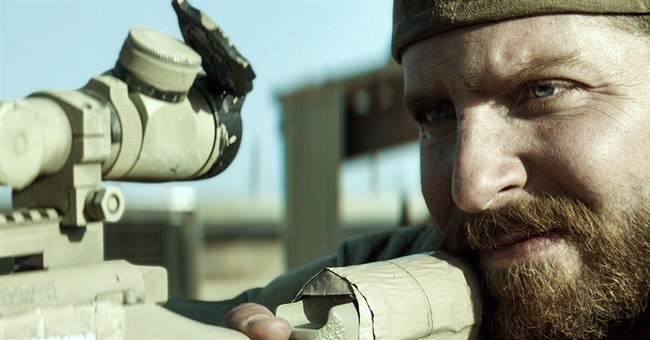 American Sniper, the film about Navy SEAL Chris Kyle, who became the deadliest sniper in U.S. history while serving four tours of duty in Iraq, has broken box office records and is nominated for six Oscars, including best picture. To say that the film is a hit among American audiences (Michael Moore, and other haters aside) would be an understatement. What is receiving far less attention—though very interesting—is how the movie is faring in the Middle East.

In Iraq, the theater at Baghdad’s Mansour Mall was “full and rowdy” during the film’s opening week—and the crowd was into it.

When Gaith Mohammed, a young man in his twenties with a degree in accounting, went to see "American Sniper" during its opening week at Baghdad’s Mansour Mall, he says the theater was full and rowdy. […]

Mohammed says one of the film’s opening scenes, when Kyle spots a woman and child who appear to be preparing to attack US troops during the initial invasion of Iraq, had the entire audience on the edge of their seats.

“When the sniper was hesitating to shoot [the child holding the RPG] everyone was yelling ‘Just shoot him!’” he said.

When asked by the Global Post whether he felt the film was in any way racist or anti-Arab, as one MSNBC reporter suggested on Friday, Mohammed replied, “No, why? The sniper was killing terrorists, the only thing that bothered me was when he said he didn’t know anything about the Quran!”

Mohammed also went on to say that movies like American Sniper gave him “strength to face ISIS.”

Others, of course, did consider the film to be ‘against all Muslims,’ and Kyle, another ‘bloodthirsty’ American troop. It’s no surprise, then, that the theater ended up pulling the film a week after its release. Nevertheless, the number of supporters is noteworthy.

Even though he saw it on the big screen already, Jalal says he was hoping to bring his family back to see the movie again. Instead, they’ll just watch it at home, he says, holding up a pirated DVD in a thin plastic sleeve that he bought from a shop a few doors down. Most of his other friends have already downloaded it illegally.

Jalal says the movie doesn’t strike him as racist or anti-Arab. He says he finds the main character appealing regardless of the fact that he’s an American soldier killing Iraqis during the US-led occupation of his home country.

“He was a hero and he went through difficult training,” Jalal explained, saying Chris Kyle was just serving his country, a universal duty for all men.

American Sniper has also been playing to packed houses in Iraq’s Kurdish region, right behind Taken 3, including in theaters owned by the same chain that that shied away from opening the film at all in Baghdad.

“The Kurds don’t like the Baghdadis that much so they have no big problem seeing them getting shot by an American,” said one film exec who operates theaters in Iraq. “So far, the film is working well for our screens in Kurdistan.”

The film has also been drawing big crowds in Lebanon. Edited versions have opened in several Gulf states, with cuts to a scene involving the Quran. Jordanian censors originally rejected the film outright, though distributors plan to submit a re-edited version.

Iraqi audiences are engaged in films like American Sniper because conflict plays such a big role in everyday life, Iraqi filmmaker Mohamed Al-Daradji told the Post.