Afghanistan to US: You May Want to Re-examine Your Troop Exit Deadline 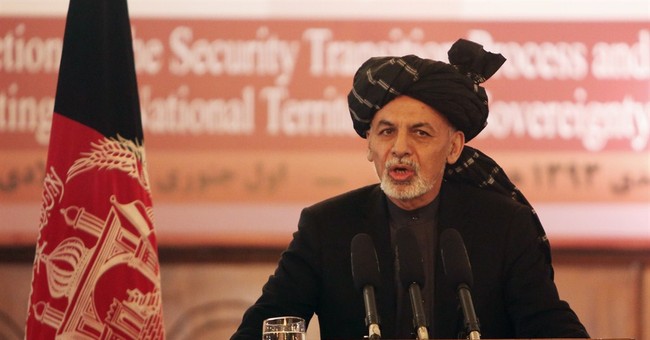 As 2014 came to an end, so too did the 13-year-long war in Afghanistan—well, formally, at least. As of Jan. 1, only 10,800 U.S. troops remain in the country serving a supportive role for Afghanistan’s military, and Obama plans to cut that number to 5,500 by 2016, and have only an embassy presence in the country the year after that.

But Afghanistan’s new president, Ashraf Ghani, is suggesting the U.S. reconsider those plans—striking quite a different tone than his predecessor, Hamid Karzai, did during his final address to parliament.

“Deadlines concentrate the mind,” Ghani told CBS’s Lara Logan, “but deadlines should not be dogmas.”

He continued: “If both parties, or, in this case, multiple partners, have done their best to achieve the objective and progress is very real, then there should be willingness to re-examine a deadline.”

When Logan asked if Obama was aware of his view, Ghani responded, “President Obama knows me. We don’t need to tell each other.”

It’s clear that regardless of our desire to diminish our presence, the U.S. is still very much needed in Afghanistan. And national security adviser Mohammad Hanif Atmar told International Security Assistance Force leaders as much last week. “We need your help to build the systems necessary to ensure the long-term sustainability of the critical capabilities of our forces,” he said, reports the Associated Press.

Afghans have mixed feelings about the drawdown of foreign troops. With the deteriorating security situation, many believe the troops are needed to back up the Afghan effort to bring peace after more than three decades of continual war.

"At least in the past 13 years we have seen improvements in our way of life — freedom of speech, democracy, the people generally better off financially," said 42-year-old shop keeper Gul Mohammad.

But the soldiers are still needed "at least until our own forces are strong enough, while our economy strengthens, while our leaders try to form a government," he said.

NATO Secretary General Jens Stoltenberg has said that Afghanistan's 350,000-member security forces are ready to take on the insurgency alone, despite complaints by officials that they lack the necessary assets, such as air support, medical evacuation systems and intelligence.

Whether President Obama heeds Ghani’s suggestion is another story.