Citizens, Sheriffs Up Against Billionaires in Fight for Gun Rights in Washington State 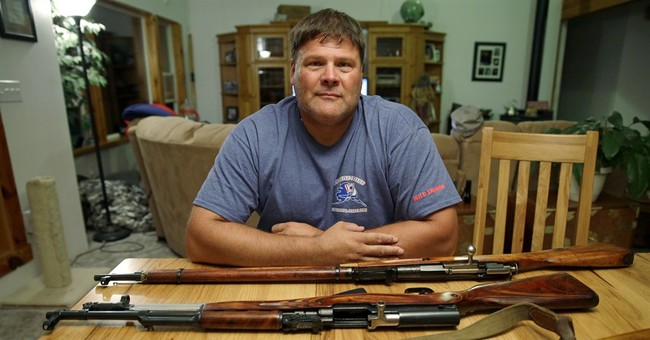 In less than one week, voters in Washington state will decide on two competing gun measures: I-594, the Washington Universal Background Checks for Gun Purchases Initiative, and I-591, the Washington Gun Rights Measure.

[I-594] would mandate background checks as a condition of most gun purchases and transfers in the state (with exceptions for weapon transfers within families and purchases involving antique guns). Its main goal is "closing the gun-show loophole," says Geoff Potter, communications director for the Washington Alliance for Gun Responsibility, the group spearheading the effort.

Washington’s Second Amendment Foundation came up with I-591, the Washington Gun Rights Measure, a pro-gun rights initiative on the ballot. [...] I-591 would prohibit the government from confiscating guns or firearms from citizens without due process, protecting against illegal search and seizure, something that happened after Hurricane Katrina. It would also prevent the government from requiring background checks, in order to prevent the creation of a universal gun registry - unless a uniform national standard is required.

While supporters of I-594 have successfully made the initiative sound innocuous enough, the reality is far from it. The 18-page measure is just the “latest and most comprehensive attempt to restrict the rights of law-abiding gun owners in the Evergreen State,” according to the NRA. “Initiative 594 is in reality a universal handgun registration scheme. Under I-594, every time a handgun is transferred, the person receiving the handgun will have their name added to the government database being maintained by the state Department of Licensing.”

It comes as no surprise, then, that the campaign has been bankrolled by a handful of ultra-rich gun control advocates, including Bill Gates, Steve Ballmer, Paul Allen, Nick Hanauer, and, you guessed it, Michael Bloomberg. I-594’s war chest has now surpassed the $10 million mark, compared to I-591’s $1.3 million. To say that the gun rights measure has been outspent would be an understatement.

Not content with the cash advantage, supporters of the gun control measure have resorted to stealing I-591 signs and sarcastically posted on Facebook that “We need more school shootings!!!” just hours after the school shooting in Marysville last week. And now, after sheriffs have backed I-591 and publicly opposed I-594—a serious blow to those behind the effort—I-594 supporters are reportedly pushing emails and robo-calls attacking them, and are urging their supporters to contact them as well.

I-594 won’t make Washington residents safer, it won’t stop criminals or the mentally-ill from obtaining firearms, and it won’t be a good use of the law enforcement community’s time and limited resources. What it will do, however, is erode Second Amendment rights, waste law enforcement resources, and turn law-abiding citizens into criminals.

The fight over gun rights may be in Washington state this election, but don’t think for a second that if it’s successful a similar measure won’t make its way on your state’s ballot in 2016 and beyond.