ISIS to Iraqi Christians: You Have One Week to Convert to Islam or Die 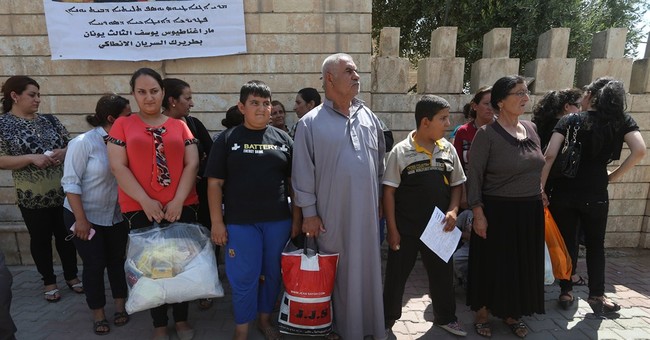 This situation for Christians in Iraq has grown even direr. ISIS is now giving the religious minority an ultimatum: convert within one week’s time or face the sword.

World Watch Monitor documented the case of Mikha Qasha, an elderly and paralyzed Iraqi Christian. ISIS came to his home, WWM reports, and gave him the options of fleeing, converting or death. They gave him one week to think about it.

Fortunately, Qasha, along with his grandson, were able to go to a safe haven in the capital area of the Kurdistan region.

Many others are still at risk, however.

According to MCN Direct, others who fled from a district in Nineveh, and from Qaraqosh and Bartella, said IS is now imposing a conversion deadline of one week for any non-Muslim. Qasha’s neighbour, a young man who fled the city this week, said he was hiding in his home with his father when IS members found them on August 17. They gave them a week, until August 24, to convert to Islam or be killed.

70,000 Christians have arrived in Ankawa, the Christian neighbourhood in Erbil and some 60,000 displaced people are in Dohuk, said Louis Sako, Patriarch of the Chaldean Catholic Church in Iraq.

Dohuk, mainly inhabited by Kurds and Assyrians, is in the north in the autonomous region of Iraqi Kurdistan while Qaraqosh, a town of about 50,000 people in Nineveh Province, sits between Mosul, Iraq's second-largest city, and Erbil, the capital of the Kurdish region, to the east.

The Islamic State took over Mosul in June. At the time there were 3,500 residing Christians who fled east to Qaraqosh, which is often referred to as the Christian capital of Iraq. Of the 3,500 about 25 people decided to stay home in Mosul. Since then nine have converted to Islam, while the others are paying jizya - the Islamic tax for non-Muslims.

The UN has launched a major aid operation: UNHCR said tents and other goods will be sent to Erbil via air, land and sea beginning Wednesday, August 20.

Archbishop Justin Welby of Canterbury described the slaughter of Christians and Yazidis as “off the scale of human horror.”

“In a globalized world where even distant nations are our ‘neighbor,’ we cannot allow these atrocities to be unleashed with impunity,” he continued. “The international community must document the human rights abuses in northern Iraq so that the perpetrators can later be prosecuted."