Perry: Record Number of People From Countries With Terrorist Ties Caught at Border 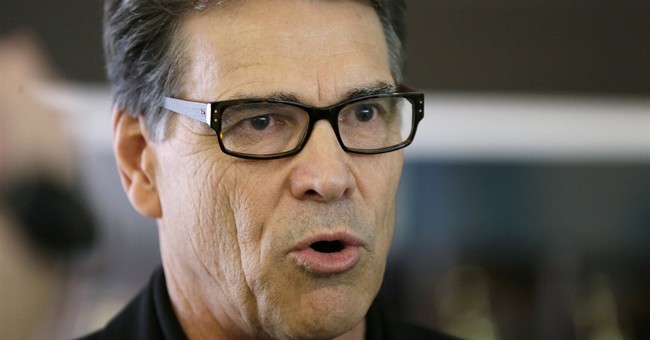 Texas Gov. Rick Perry insisted on CNN’s “State of the Union” Sunday that his decision to deploy the National Guard at the border was not related to a prospective 2016 bid, but was merely about securing the border. The illegal immigration crisis at the Southwest border is not just related to Central Americans crossing the border in droves, there’s also a record-high number of individuals coming from countries with “substantial terrorist ties,” Perry said.

“It hasn’t got anything to do with anything other than those numbers of individuals who are coming across the border,” he said. “And when you think about the idea that some of them are from countries that have substantial terrorist ties – whether it’s Pakistan or Afghanistan or Syria, we are at historic record highs with individuals being apprehended from those countries.”

That assessment was supported by House Intelligence Committee Chairman Mike Rogers, who also appeared on the show and recalled the foiled Iranian plot in 2011 to carry out terrorist attacks in the United States.

“We noticed the very dangerous trend a few years ago,” Rogers said, “when the Iranian Qods force – their external terrorist group, if you will, supported by the country of Iran – was planning an operation to use the southern border to infiltrate people into the United States to kill the Saudi ambassador.”

“So, clearly our enemies and our adversaries understand that it is a weakness,” he continued. “We have seen a trend of countries that we are very concerned about, a rise in individuals being apprehended at the border. The scary part about that is those are just the ones that get apprehended.”

Breitbart obtained an intelligence report from the Customs and Border Protection that breaks down some of those numbers.

Twenty-eight individuals from Pakistan were caught attempting to sneak into the U.S. this year alone, with another 211 individuals either turning themselves in or being caught at official ports of entry.

Thirteen Egyptians were caught trying to sneak into the U.S. this year alone, with another 168 either turning themselves in or being caught at official ports of entry.

“It doesn’t take a rocket scientist to figure out that they figured out [the border] is a weakness in our national security,” Rogers said.