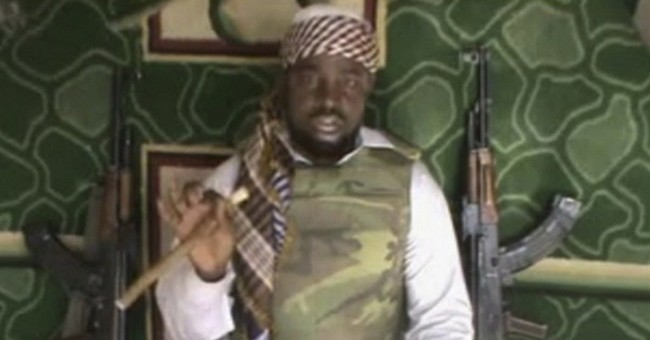 In a video explaining how they attacked Giwa Barracks earlier this month, the Nigeria-based Islamist militant group, Boko Haram, also sang songs about how they plan to continue targeting Christians, churches, and the country at large.

Sahara Reporters brings you the latest from the Religion of Peace (emphasis mine):

The 24-minute video appears to confirm the sect's sophistication as well as its access to modern weaponry.

The video shows the sect exhibiting their warfare techniques, shooting targets from specialized armed vans, as well as holding and firing grenades from the ground. It also shows the sect's commanders coordinating operations by giving orders.

The footage contains details of how the sect launched attacks from several directions in and around the military barracks. It also shows hundreds of people the sect claimed to have freed from detention by the Nigerian military.

Warning Nigerian police officers to stay off their path, the sect sang, “Police give us way, you are too weak and small to stop us. You are all women and we understand you.”

The sect sang that their demand for Sharia cannot be compromised. They restated that their targets remained churches, Christians and the Nigerian state. Part of the song stated, "We are working for Allah and must bring Shariah to existence; we are committed to protecting Muslims from being annihilated by infidels. We are going to kill them. We will enter Churches and slaughter Christians and barracks. We are calling on all Muslims to come out and fight Jihad. If you joke, these infidels will annihilate Muslims. You see how they are killing our women and children.”

The group boasted that it had demonstrated its prowess in Borno, Bauchi and Abuja, and the infidels of Plateau, Kaduna, Adamawa and Gombe.

They vowed to fight for Shariah will all their might until success was achieved.

Designated as a foreign terrorist organization by the State Department, Boko Haram has been violently attacking churches, schools, markets, and government forces since 2009.

As a result of attacks by Boko Haram and “uncontrolled reprisals” by Nigeria’s security forces, there have been more than 1,500 deaths in the country in 2014 so far, according to Amnesty International. Boko Haram is responsible for more than half of the killings, however, which includes “scores of schoolchildren who have been the victims of deliberate attacks.”

According to the United States Institute of Peace, Boko Haram believes "the politics in northern Nigeria has been seized by a group of corrupt, false Muslims" and therefore wants to wage a war against them, the Nigerian government, military, and civilians in order to "create a "pure" Islamic state ruled by sharia law."