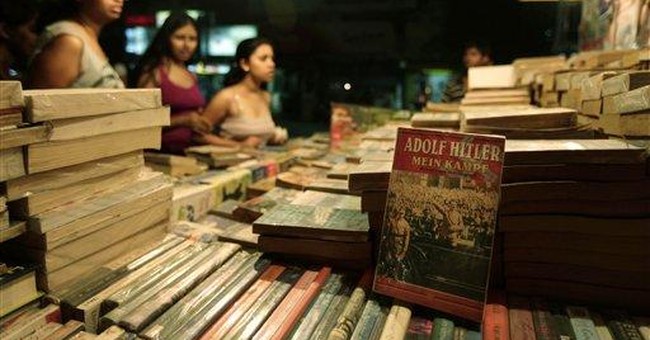 This week is "Banned Books Week," according to the American Library Association. It's a time to revel in the power of free speech and the triumph of a democratic polity over censorship. But the message being put on by the ALA and commemorated by a few other organizations comes across a bit muddled.

Throughout modern history, governments have taken it upon themselves to control what ideas that we have access to. Famous examples are Uncle Tom's Cabin, James Joyce's Ulysses, and Lady Chatterley's Lover. The United States has generally been an exemplar here, and we have some of the most friendly free speech laws in the world. "Banned Books Week," as it's put on by the ALA, should be a commemoration of how we've struggled with government prohibition on literature and how tenuous our connection with freedom can be in this area.

But the ALA has also put out its list of its "Top Ten Challenged Books," which contains things like Fifty Shades of Grey, The Hunger Games, and Captain Underpants. Reason and The Fire both wrote about these "challenged" books in an earnest way, and how silly it is that administrators and nannies are "challenging" these books.

"Challenged" books, however, are very different from "banned" books. In an era of Amazon and Kindles and e-readers, it's awfully hard to restrict access to books to anyone in the United States. Parents who have a problem with elementary school libraries or middle school English curricula might be meddlesome or annoying, but this is not an issue of "banned" books. It might be silly for parents to band together to remove "Captain Underpants" from their local elementary school library, but we can all agree that the right for parents to attempt to influence how their children are taught at their local public schools is a legitimate one.

These "challenged" books pale in comparison with actual books banned in other countries around the world. The United States is a vanguard in this area. American Psycho by Bret Easton Ellis was banned until recently in Germany. The Da Vinci code is banned in Lebanon. Zhuan Falun, a Falun Gong text, is banned in China. The Satanic Verses, a book that got a fatwa put on Salman Rushdie's head, is banned in 14 different countries.

As David Forbes writes, in noting an extreme case in the U.S. about a convicted felon attempting to sell a book about evading federal income taxes:

It's incredibly hard to ban a book in the U.S., even compared to the rest of the industrialized world. Censorship fights in the U.S. usually revolve around a media outlet refusing to acknowledge a particular view or a local school yanking offensive books from library shelves. Federal bans are nearly unheard of...

Compared to actual free speech fights around the world, local school administrative clashes are incredibly small-bore. Peruse a list of books that are banned in China and you might even think that worrying about "challenged books" in the United States is a first world problem.

"Banned Books Week" is a valuable historical reminder of the fights we've had about free speech and should be a celebration that the United States is nearly alone in our remarkable breadth of freedom of speech - compared with both developing and fellow advanced nations. It's important to appreciate the fights that occurred over things like Ulysses and The Canterbury Tales and how other countries still struggle with freedom of speech. It's just unclear that hand-wringing over elementary school curricula belong in the same breath.