The McConnell Theory of Congressional Gridlock 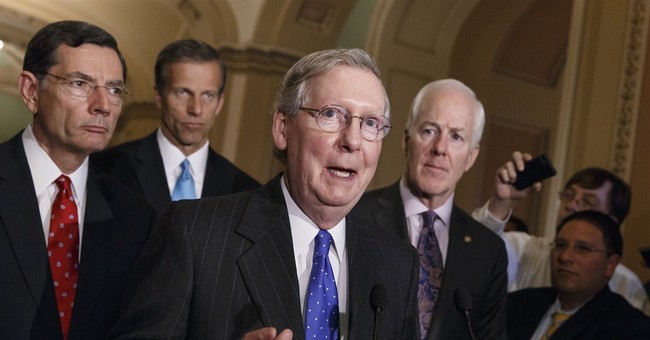 Conservative writers and legislators gathered at the American Enterprise Institute this week to discuss how "conservative reform" can make serious policy inroads both in the Republican party and with the American people.

Senate Minority Leader Mitch McConnell touched briefly on the policies that conservative reformers could push, but focused more on the process through which reformers could hope to work.

Really, though, McConnell laid out his theory on why Congress has become so polarized. He laid the blame at the feet of one person: Harry Reid.

The idea popular with progressive analysts goes something like this: Republicans have had to deal with an increasingly conservative base who have been electing increasingly conservative candidates who stand in staunch opposition to President Obama and anything he produces. This has led to the rise of filibustering on the part of Republicans and the grinding to a halt the gears of the legislative process. The origin story here is that Republicans agreed even before the President took office to oppose anything and everything.

That's wrong, McConnell says. It's wrong because of Harry Reid, who has concentrating legislating powers in his own office, drained committees of their ability to shape legislation, and refused to let the amendment process work.

I don't mind saying that Senator Reid has done tremendous damage to the Senate. Tremendous damage. By arrogating to himself powers that have traditionally resided with committees and individual members, he's turned the Senate into a graveyard of good ideas and serious open debate. His propensity to block amendments even on his own side has prevented, for years, the organic development of policy that has always characterized the senate at its best.

Brian Darling of the Heritage Foundation actually took a look at how Senate procedure under Harry Reid has evolved. Reid has used the amendment tactic of "filling the tree" to prevent the minority from offering up amendments:

This precedent and the Reid tactic of filling the amendment tree has effectively locked out the minority party from offering amendments. Reid could cease the practice of filling the tree, and he did not fill the tree on subsequent legislation, yet this precedent grants even more power to the Senate Majority Leader to block amendments from other Members.

McConnell says this practice has destroyed bipartisanship in the Senate. More than that, it's historically unprecedented, and McConnell has preached that allowing the minority to force the majority into unpopular votes greased the wheels in the Senate.

When we were in the majority, I was telling my members, the price of being in the majority is you have to give the minority votes that you're not going to like in order to get the bill across the floor. That's always the way it was. We'd work longer days and week using the clock to force consensus.

Under this status quo, it's certainly possible that a dedicated and extreme minority party could still gum up the works. McConnell, however, explains that a spirit of bipartisanship - of honesty between the parties - is fostered when the majority leader allows uncomfortable amendments. And the obligations of being an elected representative often draw them away from Washington - nobody wants to actually be there to vote on endless amendments.

It may be the case that an intransigent Republican minority would refuse a spirit of bipartisanship in the current atmosphere. But Democrats never allowed that to happen. McConnell pointed to Obamacare as the first instance of Democrats upending the traditional way of doing business in the Senate - a process that got started a mere two months after President Obama was inaugurated. Harry Reid drowned bipartisanship in the bathtub.

You can watch the entire speech here, starting at an hour into the conference: