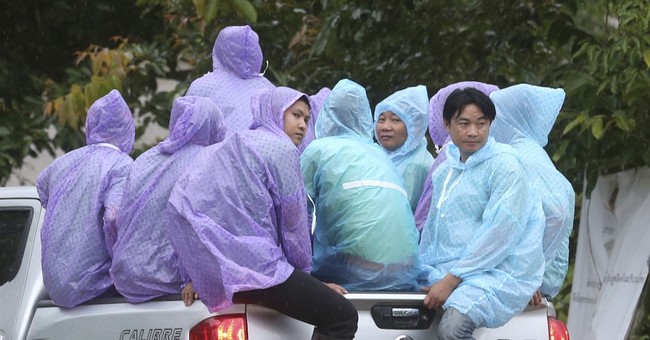 The young boys on the Thailand soccer team who were trapped in a cave with their coach for almost three weeks were recently reunited with their families.

Doctors are still concerned about their health, so the boys, ranging in age from 11 to 16, are being kept in a controlled environment for observation. They were able to see their families through a glass, while wearing hospital gowns and masks. Families were not allowed to enter the room in case of infection said Dr Chaiyawej Thanapaisarn, according to a report from CNN.

Thanapaisarn also said that three boys were being treated for pneumonia, noting that the recovery process would take about a month from the time of discharge.

Tanawat Viboonrungruang, the father of 11-year-old Titun, said he felt relieved to see his son was "still healthy."

"I started to cry, everybody started to cry…I want to say thanks to those who rescued my boy. And helped him to have a new life, it's like a rebirth," said Viboonrungruang. He said that when he saw his son through the glass, all he wanted to do was hug him, according to a CNN report.

On July 11th, health ministry inspector, Tongchai Lertvirairatanapong said the boys were in good condition, however that had lost an average of 4.4 lbs. He attributed their overall good health to their coach, 25-year-old Ekkapol Ake Chantawong, a former monk who was the last one out of the cave.

"I have to praise the coach who took care of the footballers very well," Lertvirairatanapong said.

The boys had not eaten for nine days prior to being found. They stayed alive by drinking the cave water.  The boys were rescued in three groups. The final group is still undergoing tests and have not yet been allowed to see their families through the glass, as the first two groups have. All three groups of boys are expected to be held in the hospital for about a week to allow their immune systems to recover.

#CNN inside the Tham Luang Nang Non cave this morning where the soccer team was rescued from. @McKenzieCNN #ThaiCaveRescue pic.twitter.com/JQullZ2w7r

The photo below was taken at the school across from the hospital in Chiang Rai where the boys are recovering, as the schoolchildren excitedly chant "Wild Boars, keep fighting."