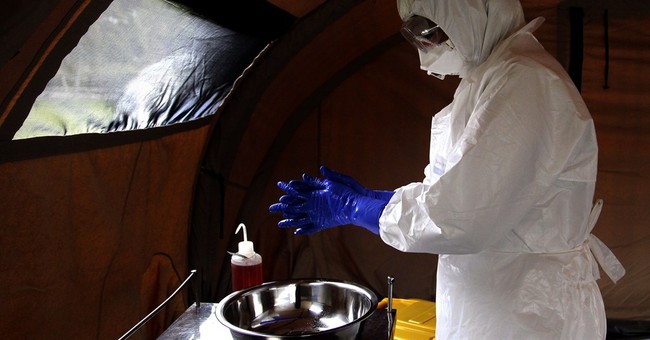 UPDATE 5:50: According to the CDC, the patient being treated came back from Liberia after attending a funeral on September 19. The patient's symptoms started on September 24 and hospitalization began on September 28 in Dallas. Several family members to the patient may have been exposed. Because the patient did not get sick until four days after getting off the airplane, nobody who flew with the patient is at risk. CDC Director Tom Frieden said during a press conference this afternoon, "There is no doubt in my mind that we will stop it here."

"The bottom line here is that I have no doubt that we will control this case of Ebola so that it does not spread widely inside the U.S." he added.

The CDC has had a plan in place for awhile now about how to deal with a case should one show up in the U.S.

"We are well prepared to deal with this crisis," a health official said.

Ebola is not transmitted through the air, but only through direct contact with bodily fluids. It can be killed by soap. CDC goals moving forward include the following:

-To care for the patient.

-Identify all people the patient was in contact with while infectious.

5:00 pm ET: The first case of Ebola in the United States has been confirmed by the Centers for Disease Control. More from CNN:

A patient being treated at a Dallas, Texas, hospital is the first case of Ebola virus diagnosed in the United States, the Centers for Disease Control and Prevention announced Wednesday.

Several other Americans were diagnosed in West Africa and then brought to the United States for treatment.

Two weeks ago, President Obama announced he was sending U.S. troops to West Africa to combat the spread of the virus. He has also announced partnerships with multiple countries to combat the deadly disease. Officials have expressed concern about the virus mutating into an airborne illness.

A CDC press conference is scheduled for 5:30 pm ET.