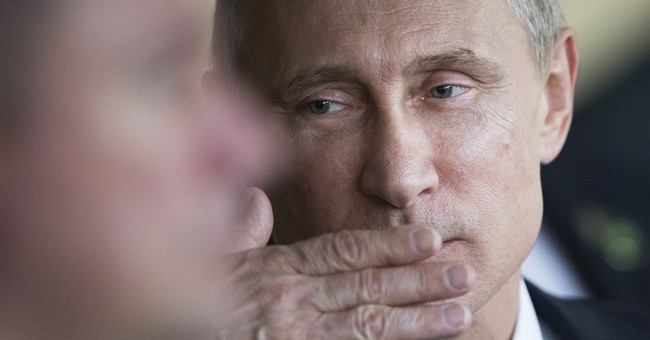 It's been 12 days since Malaysia Airlines Flight 17 was shot out of the sky by Russian separatists with a surface to air missile, yet President Vladimir Putin seems untouched by global outrage over the incident. Now, the United States is accusing the Russians of violating a key nuclear test ban put forth by President Ronald Reagan and the former Soviet Union's Mikhail Gorbachev. The accusation comes after it was discovered Russia has been testing long range missiles for years. More from the New York Times:

The United States has concluded that Russia violated a landmark arms control treaty by testing a prohibited ground-launched cruise missile, according to senior American officials, a finding that was conveyed by President Obama to President Vladimir V. Putin of Russia in a letter on Monday.

At the heart of the issue is the 1987 treaty that bans American and Russian ground-launched ballistic or cruise missiles capable of flying 300 to 3,400 miles. That accord, which was signed by President Ronald Reagan and Mikhail S. Gorbachev, the Soviet leader, helped seal the end of the Cold War and has been regarded as a cornerstone of American-Russian arms control efforts.

Russia first began testing the cruise missiles as early as 2008, according to American officials, and the Obama administration concluded by the end of 2011 that they were a compliance concern. In May 2013, Rose Gottemoeller, the State Department’s senior arms control official, first raised the possibility of a violation with Russian officials.

“The United States has determined that the Russian Federation is in violation of its obligations under the I.N.F. treaty not to possess, produce or flight test a ground-launched cruise missile (GLCM) with a range capability of 500 kilometers to 5,500 kilometers or to possess or produce launchers of such missiles.”

Meanwhile, sales to Russia from the United States have increased, not decreased, since heavy sanctions were put in place months ago.

U.S. Census Bureau foreign trade data show that exports rose 17 percent from March through May _ the most recent months for which the data is available _ compared with the previous three months, before sanctions were imposed. The value of exports has risen in each consecutive month this year, an unusual trend in a trade relationship that historically fluctuates on a monthly basis.

Russian markets account for less than 1 percent of U.S. exports, but what the U.S. sells to Russia is largely high-tech and expensive goods, including technology and equipment for the energy sector, which faces the threat of targeted sanctions.