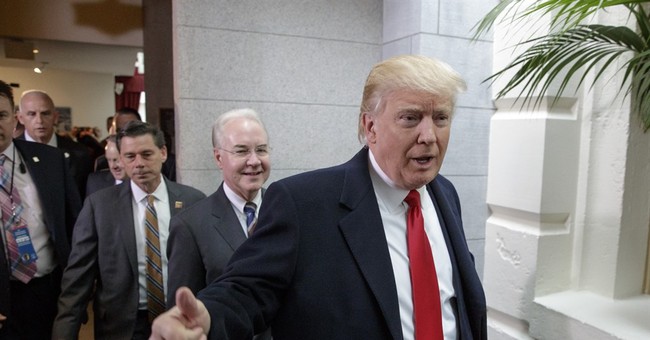 One of the biggest open questions heading into the Obamacare 'repeal and replace' process was just how much political capital President Trump would be willing to spend on the endeavor. Would he offer lukewarm support for the legislation and hold Hill leaders at arm's length, or would he lean into the fight? That verdict remained somewhat hazy until last week, when the president threw his full rhetorical weight behind the bill that some of his allies have been trying to marginalize and attack as "Ryan Care" -- even though its inner core was designed by Trump's hand-picked HHS Secretary. Trump then turned up the heat even further during a large rally in Kentucky yesterday, venturing into deep red territory to implore Republican members to vote 'yes,' going out of his way to hype Thursday's big vote (scroll forward to the 29:00 mark):

"As we move toward the crucial House vote on Thursday, this is our long-awaited chance to finally get rid of ObamaCare. Our long-awaited chance. We’re gonna do it. The alternative is what you have," he said. "What you have is nothing. The worst. It's the big lie...I look forward to working with [Sen. Rand Paul] so we can get this bill passed in some form, so that we can pass massive tax reform which we can't do until this happens. So we got to get this done before we can do the other."

There are several telling elements to unpack within that short quote. First, Trump is rightly presenting Thursday's vote as a vital step on the difficult but (finally) plausible path to uprooting much of Obamacare, which will require Republican unity. Second, he called out a resistant member of Congress by name. In this case, he adopted a hopeful and friendly tone toward Sen. Paul, but he also sent an unsubtle message to any member from a state or district in which Trump is popular: I care about this outcome, I've got the biggest megaphone in the world, and I'll use it. Third, he set up the healthcare vote as a prerequisite for other key elements of his agenda, including tax reform. Without establishing a new post-Obamacare budgetary baseline, the tax piece of Trump's agenda would become much more difficult, and would almost certainly be significantly delayed.

Trump and Paul Ryan are singing from the same hymnal on this important procedural point. Obamacare repeal is the lead train car on the train track, with the rest of Trump's plans waiting behind it; stalling or killing this bill would severely hamper Trump's broader agenda.  Having made his point in front of thousands of cheering supporters, and an even larger television audience, the president arrived on Capitol Hill this morning to address House Republicans in person.  He again took full ownership of the American Health Care Act and framed its passage as an early referendum on his leadership.  Voting down the proposal would be a political catastrophe and an anti-Trump failure, he warned, specifically directing certain comments at the conservative House Freedom Caucus:

.@potus says he thinks @RepMarkMeadows and "his group" will come along. "Because honestly, a loss is not acceptable folks."

Trump to House Rs on AHCA vote: "I honestly think many of you will lose your seats in 2018 if you don't get this done."


"I'm gonna come after you," he reportedly told recalcitrant Republicans, only half joking.  In other words, this is a binary choice -- you can either vote with me to repeal Obamacare, or you can vote with Nancy Pelosi to keep it.  That's a bare-knuckled shot across the bow of members on the party's right flank who are considering a 'no' vote this week.  Some waverers are sounding more open to siding with the president on Thursday, while others are headed to the White House for more sticks-and-carrots cajoling.  In a positive development for Trump and Ryan, the House Freedom Caucus announced that it will remain neutral on the legislation, as opposed to whipping its members against it.  As President Trump's entourage arrived on Capitol Hill this morning, we analyzed the politics and pressure points of this debate.  What seems clear is that Trump recognizes that this is the first major legislative push of his presidency, so he's going all-in to get a win (via Right Sightings):


Allahpundit notes that the AHCA is unpopular with the public -- partially because many Republican voters aren't happy with it -- and quotes a few House Freedom Caucus members predicting that the vote will go south.  AP thinks that's smoke-blowing: "When the time comes for a gut-check vote, most FC members will fear Trump’s wrath more than they will the wrath of a supposedly “small-government” conservative grassroots that voted en masse for Trump last year — especially since the House bill now looks to be little more than an opening offer to the Senate."  What does he mean by that Senate point?  Well, one of the changes Paul Ryan is tacking onto the bill is guidance that invites the upper chamber to add $85 billion in additional healthcare tax credits for 55-64 year olds in order to alleviate premium costs.  Ryan doesn't want to start from square one legislatively, but he also needs to send a signal to moderates (whose votes are also very much in play, as I mentioned in the clip above) that a major political vulnerability is being addressed.  This provision is how he split that baby, evidently.   Meanwhile, as the whip counts are tabulated, Washington holds its collective breath.  I'll leave you with Avik Roy calling Ryan's tweaks 'one step forward, one step backward' (he references this important issue, as highlighted by Sen. Pat Toomey), and the conservative Club For Growth's new ad urging members to torpedo the Trump/Ryan plan:


Heritage Action is also crossing Trump and House leadership by scoring AHCA "no" as a so-called "key vote," absent (unlikely) additional changes to its "architecture."  And finally, here's Mitch McConnell keeping his eye on the ball by reminding everyone that Obamacare's status quo is falling apart: