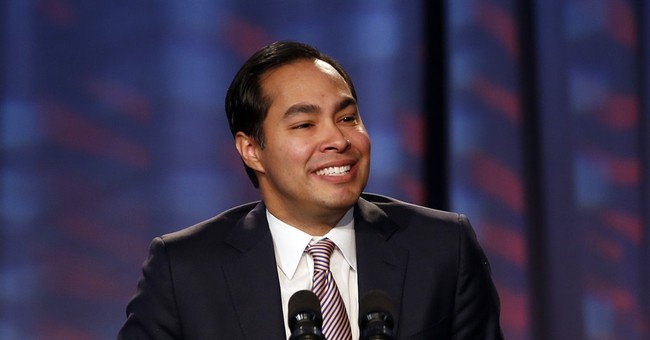 Not quite, but one Democratic source is suggesting that her campaign has narrowed its list to one person, or at least one skin color. Just a few months ago, Politico reported that Team Hillary was weighing the possibility of skipping primary debates altogether (the field hasn't gotten any more competitive since then), and that her inner circle was already tossing about names for the VP slot -- with an emphasis, of course, on "diversity."  Plug that algorithm into Democrats' identity politics machine, and out pops someone named Julian Castro:

Hillary Clinton’s campaign is likely to choose Secretary of Housing and Urban Development (HUD) Julián Castro or another Hispanic politician to be her running mate, former HUD Secretary Henry Cisneros said in an interview that will air Sunday. “What I am hearing in Washington, including from people in Hillary Clinton’s campaign, is that the first person on their lists is Julián Castro, the ... Secretary of Housing and Urban Development, who use[d] to be the Mayor of San Antonio,” he said in an interview with Univision’s Al Punto. “They don’t have a second option, because he is the superior candidate considering his record, personality, demeanor and Latin heritage...I think there is a very high possibility that Hillary Clinton may choose Julián Castro,” he said.”


Castro, 40, was Mayor of San Antonio -- a perch with very little executive authority -- before being plucked by President Obama to serve as Secretary of Housing and Urban Development (HUD).  National Review's Jim Geraghty snarks that the deeply inexperienced Castro's alleged inside track onto the Democratic ticket belies a political bench so thin as to be accurately described as "anorexic."  Geraghty authored a piece last year describing the ways in which Castro's reputation is massively overhyped, which didn't include this ironic morsel:

San Antonio failed to properly spend funds approved by Congress to combat the housing crisis while President Barack Obama’s expected nominee to run the Housing and Urban Development Department was mayor of the city, according to a 2012 report from the agency’s inspector general. The report could be a blemish on the record of San Antonio Mayor Julián Castro, a rising star in the Democratic party whose consideration for a spot in the cabinet is seen as a way to burnish his national political profile.


One might imagine that this embarrassment barely registers as a blip to the Clintons, whose capacity for shameless, myopic corruption and rule-skirting knows no bounds.  Then again, Castro wouldn't be selected for his (scant) experience or (extremely dubious) preparedness to be president.  He'd be selected because a senior citizen white woman wants a young, likable Hispanic to balance out her ticket.  It's that simple.  The so-called Obama coalition, on which Hillary is counting to prevail, revolves around identity and feeling; Castro ticks a number of key boxes.  The blueprint isn't a mystery:

Hillary Rodham Clinton is running as the most liberal Democratic presidential front-runner in decades, with positions on issues from gay marriage to immigration that would, in past elections, have put her at her party’s precarious left edge. The moves are part of a strategic conclusion by Clinton’s emerging campaign: that it can harness the same kind of young and diverse coalition as Barack Obama did in 2008 and 2012, bolstered by even stronger appeal among women. Her approach — outlined in interviews with aides and advisers — is a bet that social and demographic shifts mean that no left-leaning position Clinton takes now would be likely to hurt her in making her case to moderate and independent voters in the general election next year.


Exactly. Energize low-information voters with carefully-selected wedge issues (multiple flip-flops welcome!), press the correct racial buttons, and sound the roar of womanhood -- all while pandering to the party's left flank, and winking knowingly at Wall Street donors.  It's going to be a long 18 months, friends.  Before you go, please enjoy SNL's latest Hillary sketch, once again portraying her as an anti-charismatic, power mad, hopelessly lame politician:

"I have the perfect peaceful day planned. On the final day of my eight years as president, my soul will leave my body, shoot into the sky, and become an eternal ball of bright white light. Then, and only then, shall I know peace."