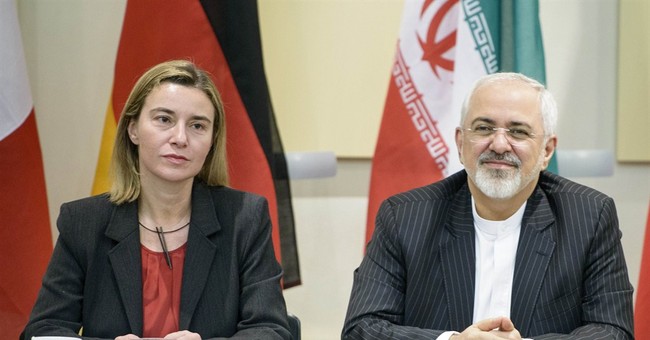 Some in the media will call this a "deal." It's not. It's a face-saving, time-buying charade -- an implicit admission that years of repeatedly-extended negotiations have resulted in nothing concrete, with yet another deadline disappearing in the rearview mirror. Consider this tortured verbiage provided to the Associated Press:

Iran and six world powers have agreed on the outlines of an understanding to limit Iran's nuclear programs, officials told The Associated Press Thursday. Negotiations continued on a dispute over how much of it to make public. The officials spoke outside weeklong talks that have been twice extended past the March 31 deadline in an effort to formulate both a general statement of what has been accomplished and documents describing what needs to be done to meet a June 30 deadline for a final accord...The Iranians want any results from talks in the Swiss city of Lausanne described less as a deal and more of an informal understanding … Russian Foreign Minister Sergey Lavrov, who left Lausanne Tuesday, said the two sides were close, the Interfax news agency reported. There are "only a few steps left to take or, in some cases, even-half steps, and some things have already been agreed upon," he said. But as the talks dragged on, one Western official said early Thursday that they were "at a tough moment and the path forward is really unclear," adding that the idea of breaking talks off over Passover and Easter and resuming them next week had been informally raised. That was confirmed by another official...By blowing through self-imposed deadlines, President Barack Obama risks further antagonizing lawmakers in both parties who are poised to take their own action to upend a deal if they determine the administration has been too conciliatory.


So we have "outlines of an understanding" that allow the parties to keep on negotiating, with the Iranians (a) stressing that the agreement is informal and non-binding at this stage, and (b) lobbying to keep as many details -- to the extent that they exist at all -- private.  The Guardian  reports that this "understanding" will feature "secret parameters."  So far, Iranian officials seem pretty excited about this "breakthrough:"

In the lead up to his 2013 election victory, Hassan Rouhani gave an interview in which he pushed back against the suggestion that as Iran's nuclear negotiator during the 2003 to 2005, the program was suspended under international pressure. An angry Rouhani shot back and described how Iran was able to manipulate international negotiations and ultimately advance the program. "The Tehran Declaration was supposed to outline the resolutions and suspensions," he said. "We didn't allow it. We only halted the gas supply for those 10 centrifuges in Natanz." Though negotiations with European countries began in October 2003, he said the overall nuclear program expanded. "Do you know when heavy water was developed? Summer of 2004. Do you know when we developed yellowcake? Winter 2004," Rouhani said. "Do you know when the number of centrifuges reached 3,000? Winter 2004." "We halted the nuclear program?" he asked the interviewer rhetorically. "We were the ones to complete it!"


He and Tehran's chief negotiator (a hothead who's reportedly known for angrily berating his Western counterparts) are apparently feeling chipper about today's developments. Remember, these are the puppets of a fanatical, anti-Semitic, anti-American regime that is the world's leading sponsor or terrorism, known for cheating, lying and evading international obligations.  Iran has been killing Americans and Jews for decades.  Its supreme leader leads chants of "death to America" to this day.  More details to come…I'll leave you with my appearance on Varney & Co. this afternoon