Walker Opponent: I Was Downsized, Not 'Fired,' From My Own Family's Company 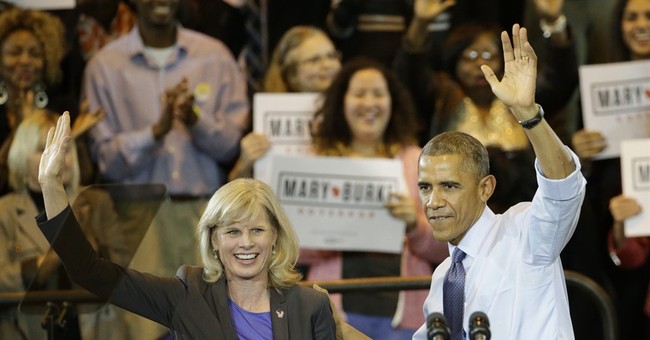 In my Hot Air item on Marquette Law School's favorable final poll for Scott Walker yesterday (summarized by Conn here), I touched briefly upon a story alleging that Democrat Mary Burke had been fired from her family's bicycle company in the 1990's.  Matt visited the brewing controversy in a post last evening. Burke has touted her business acumen and 'job creation' experience at Trek as a centerpiece of her gubernatorial campaign.  I expressed some degree of skepticism over the Wisconsin Reporter's scoop, as the top named source in the piece is a Republican county chairman, and other quotes were mined from anonymous sources.  Burke initially denied the allegations outright, calling them "ridiculous" and "completely false."  But upon further review, there seems to be more 'there there' than she's let on:


I just spoke with the former President and CEO of Trek Bicycle who confirmed to me that, yes, Mary Burke was fired. Story coming shortly — Dan O'Donnell (@DanODradio) October 30, 2014


Uh oh.  That former president and CEO, incidentally, is a separate (named) source from the aforementioned local GOP operative.  Two former executives are now on the record. Here's the latter's account:

In 1993, Tom Albers learned about big problems with Trek Bicycle Corporation’s European division.  Sales numbers were down, and employees were in a near mutiny against the young woman Trek founder Richard Burke had put in charge. Albers, Trek’s Vice President and Chief Operating Officer, served as Burke’s second-in-command and suddenly had to navigate a very difficult situation. The head of Trek’s European division was his boss’ daughter, Mary... “Her performance in Europe was not good,” he says.  “We were losing a lot of money for us at the time.  I don’t remember the amount, but it was considered significant based on where we were [as a company] at that particular point in time.”  “And also, we were encountering personnel/people problems over there.  The people were threatening to leave the company.  Many of them were.” Primarily, Albers contends, because of the managerial style of their supervisor, Mary Burke. “Her way of managing was kind of a ‘her way or the highway’ kind of approach to things,” Albers explains...

“So because of all that—which had gone on for a while, obviously—John Burke went to his father basically saying, ‘We need to make a change over here.’  Obviously, being a family situation, this was extremely sensitive and very difficult to pursue.  So Dick Burke came to me and said, ‘Before anything is done here, would you go over there and give me your thoughts on what the situation is like?’” Albers flew to Trek’s European headquarters and quickly discovered that John Burke wasn’t exaggerating. “I pretty much came back with the same conclusions that John Burke had made; and that was that we had major people problems over there and were in a situation where we could lose a lot of people.  We were losing a lot of money and I couldn’t see where Mary Burke was going to turn this thing around.” Albers reported his findings to Richard Burke, who listened intently and then, Albers says, acted decisively. “The family—and by that I mean Dick and John Burke—finally agreed to bring her back.  And so, to say it bluntly, she was fired.”


And there's your money quote. Albers says he left Trek on good terms, with the "utmost respect" for the Burke family, but that their relationship turned "frosty" after he accepted an offer from a competitor.  He's donated $50 to Scott Walker's campaign, but insists his decision to speak out isn't politically-motivated:

“I had made the decision a couple of months ago that I would not come forward on my own with information about Mary Burke,” he explains.  “The only thing that’s brought this to a head is the article [in The Wisconsin Reporter] in which [former Trek executive] Gary Ellerman threw my name out there as someone who had conducted a review of Mary Burke’s performance in Europe...I decided that instead of saying ‘no comment,’ I wasn’t going to lie.  I would tell the truth.” Albers says that Ellerman’s account is truthful, and it has been corroborated in the Wisconsin Reporter by a number of other Trek sources.


Burke's family disputes all of this as "character assassination," praising her leadership at Trek.  The mainstream media, playing frantic catch-up on a story they evidently didn't bother to investigate for months -- even as Burke routinely cited her Trek experience as a raison d'etre of her campaign -- is finally asking questions.  Burke has shifted from categorical denials to a slightly different explanation: "We decided to restructure and there was no need for my position and two of the people reporting to me could directly report to people in the United States," she told the Milwaukee Journal-Sentinel.  She wasn't "fired;" she was downsized in a "restructuring."  Hmm.  Two additional nuggets from the Journal-Sentinel story:

She left the company in June 1993, taking a two-year break to snowboard, travel and work for a bicycle trade group. John Burke said he asked his sister to return to Trek in 1995...Mary Burke also served as commerce secretary under Democratic Gov. Jim Doyle from 2005 to 2007. Her [Democratic] predecessor in that role, Cory Nettles, has said that Burke's no-nonsense style upset some in the business community. "She was very, very tough," Nettles said recently. "People take umbrage at that." In a September 2006 email that first surfaced two weeks ago, Nettles expressed a far harsher opinion of Burke. "She's a disaster," Nettles wrote at the time to another political appointee who was still working under Burke at the state Department of Commerce.


Is partisan Democrat Cory Nettles party to the "smear" conspiracy, as well?  If you read through the whole piece, Burke's staunchest defender against all of these charges is, um, her brother.  The Wisconsin GOP has released this video round-up of news coverage surrounding the 'October surprise'-style bombshell:

"We reorganized and eliminated the position that I had."


Multiple former executives at Trek Bicycle now say Burke was forced out of her position by her own family as a consequence of her terrible management, and a fellow member of a Democratic administration referred to her leadership as "a disaster" in a contemporaneous assessment.  And now she wants to be governor.  Even as GOP-aligned pollsters are privately warning that Marquette's Walker +7 projection is more bullish than their internal findings, this can't be the front page coverage Team Burke was hoping to see five days out from the election:

Editor's note: A version of this item is cross-posted at HotAir.com