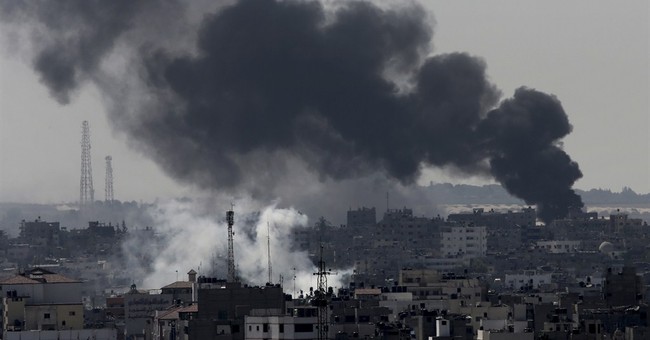 UPDATE - Despite the UN's (and President Obama's) insistence on an immediate humanitarian ceasefire, the battle in Gaza rages on. Israel is blaming errant Hamas rockets for horrible explosions at a hospital and a refugee camp, killing at least 10 people earlier today. The IDF published an infographic that it says tracks 100 Hamas rockets that have fallen within Gaza's borders since July 8:

Hamas aims for Israel, but its rockets have hit Gaza over 100 times in 9 days. pic.twitter.com/O1fJ5YYF23


Four people are pronounced dead from a mortar attack in the Eshkol region, and three others remain in serious condition...Hamas is celebrating the “success” of the mortar shelling at the Eshkol region.


And another Hamas attack:

Five Gaza militants breach Israeli border and open fire at IDF troops, causing several casualties. The troops returned fire, and it is possible some of the militants escaped back into the Strip. Troops are combing the area. Residents of a community in the Sha'ar Hanegev Regional Council and of another community in the Sdot Negev Regional Council near the Gaza border have been instructed to remain in their homes.


This past weekend's 12-hour humanitarian truce between Israel and Hamas, announced late Friday, represented a short respite in the three-weeks old conflict between the two sides. The first party to break the temporary calm was Hamas, after the terror group rejected Israel's offers to extend the peace window:

The Israeli cabinet approved a 24-hour extension of its cease-fire Saturday but said it would respond to any future rocket fire from Gaza after Hamas rejected an earlier proposed four-hour extension and fired rockets into Israel. The announcement came after Hamas confirmed that it fired five rockets at Israel late Saturday after rejecting an earlier offer from Israel to extend a 12-hour humanitarian cease-fire by four hours, casting new doubt on international efforts to broker an end to 19 days of fighting. The terror group said two of the rockets were aimed at Tel Aviv. Police in Israel's second-largest city dispersed a peace rally attended by several thousand people because of the threat, a spokesman said. Hamas spokesman Sami Abu Zuhri said the group rejected Israel's proposal to extend an original 12-hour lull by four hours, until midnight (2100 GMT) Saturday. Meanwhile, the Israeli military warned residents of areas where there had been heavy fighting against returning there.


Lots of information packed into that paragraph. Despite sustaining rocket fire after a rejected extension, the Israeli government nevertheless green-lit a day-long, good faith ceasefire. The Hamas rockets that punctured the quiet were aimed at Tel Aviv, where Israeli peace demonstrators had to be rapidly dispersed for their own safety. These people were demonstrating for an accommodation with the terrorist cartel that was literally trying to kill them. As Israel prepared to re-engage in the fight, it re-issued warnings to Palestinian civilians against returning to dangerous areas. Hamas, which targets Israeli innocents, also admonishes its civilians against heeding the IDF's warnings. They're more valuable to the terror campaign as human shields, frustrating Israel's response. And they're more valuable to the anti-Israel public relations campaign…well, dead. To the surprise of no one, Israel's unilateral 24-hour ceasefire didn't last:

Israel observed a 12-hour humanitarian cease-fire from 8 a.m. on Saturday, during which time Gazan civilians stocked up on essential supplies and buried their dead. Israel offered to extend the cease-fire by four hours, and later by 24 hours, but was rebuffed in the form of rockets fired from Gaza. Israel continued to observe a cease-fire until mid-Sunday morning when volleys of rockets led the security Cabinet to order the Israel Defense Forces to continue its strikes on Gaza.

5 outgoing rockets from a populated area in Gaza a short time ago. Photo by reporter Nick Schifrin. pic.twitter.com/0Rm7g8WC5f


Having rejected several Egypt-proposed ceasefire agreements while breaking and violating the agreements to which they have acceded, Hamas had the gall on Sunday to insist upon a new one. Israeli Prime Minister Benjamin Netanyahu highlighted the absurdity and dishonesty of the terrorist organization's demands on Fox News Sunday:


"Well, Hamas has broken five ceasefires that we accepted, and we actually implemented. They rejected all of them, violated all of them -- including two humanitarian ceasefires in the last 24 hours. Now they come with their own ceasefire proposal, and believe it or not, they're violating even their own ceasefire proposal. They're shooting at us as we speak. So Israel is not obliged, and is not going to let a terrorist organization determine when it's convenient for them to fire at our cities, at our people…we'll take the necessary action to protect our people."


Jennifer Rubin is exasperated by US Secretary of State John Kerry's inept meddling in the conflict, upbraiding him for being "in the wrong place, talking to the wrong people about the wrong thing." He's undermined Israel by throwing a lifeline to Hamas. Read her full analysis to get a sense of how badly he's bungled things. Rubin also links to a fascinating Times of Israel piece describing the degree to which "civilian life" in Gaza is intertwined with Hamas' terrorist activities, and the ongoing struggle of the IDF to try to respect innocent life deliberately embedded in a war zone:


Hamas has planted its military assets deep inside the very fabric of Gazan civilian life, [a military source] said. “Hamas operatives and area commanders, as well as their rocket cell members, keeps one part of their home for normal family life. A second part of the home is the command center, or the start of a tunnel. Daily life and military infrastructure are totally interwoven,” the source said. . . . “I have not entered one civilian home that did not have weapons, suicide belts, or booby traps in it. You can see the booby traps from the outside,” the source said. Any home found to be containing women and children leads to an immediate halt of the raid, he added. “We hold our fire, there’s no question. We don’t take chances with children and women. We allow them to leave, and then continue the raid. That’s who we are, and this is the source of our strength,” he added.


Meanwhile, Hamas sympathizers marched in Chicago over the weekend, as Europe continues to brace for more anti-Semitic violence. For many, Israel's defensive war effort is merely a "news hook" excuse to unleash their Medieval hatred of Jews. Awful:


Protesters have attacked synagogues, smashed the windows of Jewish-owned business and torched others, in scenes disturbingly reminiscent of the 1938 Kristallnacht in France. The marchers have chanted “Jews to the gas chambers”, and Jewish people have been attacked on the streets of Berlin. An 18-year-old Jewish man claimed on Friday he had been punched in the face in an unprovoked attack while wearing a skull cap in the centre of Berlin, in what would be the second such incident in less than a week. Police had to step in to protect an Israeli tourist couple from protesters who charged at them shouting “Jew! We’ll get you”...One Facebook page created in the last week, entitled Jeunes Revolutionnaires Francais, or Young French Revolutionaries, posted the names, photographs and addresses of 32 French Jews encouraging members to target them. After the picture of one young man seen wearing a skullcap was put up, he was attacked in his home in the Paris suburbs on Thursday evening by a group of masked men with iron bars. The group, which picked up 2,000 followers and more than 1,500 “likes”, was taken down on Friday night after it was reported to the social network...in Austria this week, a friendly football match between the Israel’s Maccabi Haifa and a French team had to be called off, after protesters stormed the pitch and fought with the players. The Haifa captain, Yossi Benayoun, defended his players for fighting back, saying “We had no choice but to defend ourselves”. The pitch invaders in Austria were mostly immigrants of Palestinian origin, and around Europe the new anti-Semitism is being seen a phenomenon confined to Arab and Muslim communities.


I'll leave you with a short spin around the globe, where American foreign policy is failing or nonexistent: (1) ISIS' march of terror through Iraq continues apace. The terrorists are destroying cultural and religious icons, as they keep Baghdad in their crosshairs. The Obama administration is responding by seeking the full repeal of America's authorization of force resolution vis-a-vis Iraq. (2) American officials have unveiled new evidence that proves how deeply involved Russia is in Eastern Ukraine -- further verification that Russia is directly attacking its neighbor. Moscow-backed rebels continue to shoot down Ukrainian aircraft following their downing of a large passenger jet with Russian equipment. The Obama administration's response is unclear. (3) The State Department evacuated US embassy in Tripoli and rushed its diplomats out of the country in a final admission that Libya is now a failed state, overrun by radical jihadists. The Obama administration supported the military effort to oust Mommar Gaddafi from power in 2011. The situation on the ground has steadily deteriorated ever since, punctuated by the Benghazi attacks of September 11, 2012. (4) As for Syria, where presidential red lines have been breached and re-breached, this Washington Post editorialheadline sums things up: "Syrian death toll and extremist threat increases, but the US does little." Click through and read it. We're not in good hands.