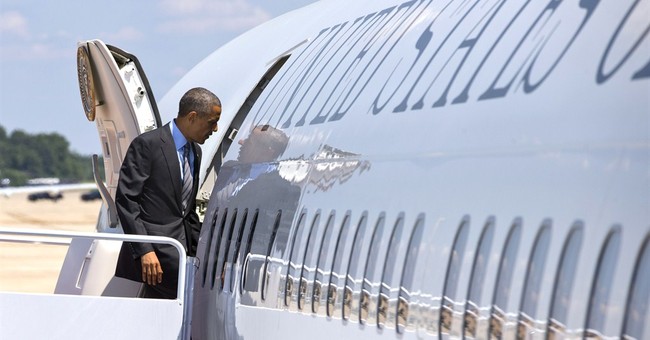 And now, a short, tweet-based summary of our Commander-in-Chief's actions in the immediate aftermath of today's developing disaster in Ukraine:

President's schedule unchanged - he's now at the Charcoal Pit near Wilmington where he ordered the "Pit Special" - burger & fries.


The advice POTUS evidently never received, or chose not to heed:


"Mr. President, 23 Americans appear to have been murdered in the Ukraine conflict. Perhaps we should cut short this burger photo op."


Remember, we were just told that this president disdains photo ops...such as surveying the current border crisis in person. Following lunch, Obama proceeded to make a (very) short statement, which included an odd formulation, and a behind-the-curve comment:

Obama on plane crash: "It looks like it may be a terrible tragedy."

Obama says they're trying to determine if any Americans were on on plane, segues to prepared speech.


One ought not fault the president for the brevity of his remarks in the earliest hours of a confusing and fluid crisis. But hundreds of deaths as a result of a (likely deliberately) downed airliner "may" be a terrible tragedy? An NBC analyst ripped the State Department for lagging far behind news reports of 23 American casualties. Minutes later, the president said the government was still attempting to determine if any US citizens were aboard. At which point, he quickly pivoted and launched into his regularly-scheduled speech on the pressing need for more domestic spending on infrastructure:

Obama, in sum: A plane crashed. It may be tragic. We're trying to see if US citizens were on board. Hey, great to be in Delaware!

Obama now talking about the real enemy: Republicans in Washington.


In case you were wondering, yes, he's been giving basically this exact same speech for years. Even some of the president's ideological brethren were deeply unimpressed with today's performance:

President Obama massively dropped the ball just now. 23 Americans killed and he says 'it looks like a terrible tragedy' then back to jokes?

Let me help, Mr President - it IS a terrible tragedy, and it's more probably mass murder of your citizens & many other nations' citizens.


President Obama attended a political fundraiser in Las Vegas the day after the deadly Benghazi terrorist attacks, did the same immediately after delivering his eulogy for the Fort Hood victims, raised a toast to "happy hour with the Democratic Party" minutes after issuing a statement on Russia's invasion of Crimea, golfed through the shutdown crisis, and led a conga line through the White House at his lavish birthday party in the midst of major economic upheaval -- just hours before Standard & Poors downgraded the United States' credit rating for the first time in history. I'll leave you with the punch line from today:

UPDATE - Initial news reports from multiple agencies regarding the American death toll appear to have been inaccurate. President Obama said on Friday that "at least one" US citizen was aboard the flight, not the 23 that was originally reported. Some lefties have jumped all over this alteration as an instance of conservatives -- including yours truly -- "lying" about Obama, or jumping the gun to criticize him. They're missing the point entirely, of course, intentionally or otherwise. See my Twitter timeline from this afternoon for my response. One tweet:


(2) # of US deaths in *no way* impacts my point, which was that carrying on w/ photo op, partisan speech, fundraiser was inappropriate.