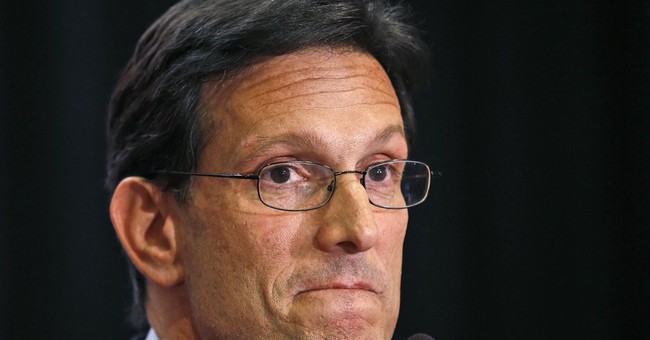 Our breaking news post captured how thoroughly thunderstruck professional politicos were by House Majority Eric Cantor's primary loss on Tuesday. As the news continues to sink in, a few thoughts:

(2) Cantor didn't just lose, which is shocking enough in and of itself; he got blown out by ten points. Some people have suggested that Democratic chicanery may have played a role in Dave Brat's mega-upset, perhaps as retaliation for this recent maneuvering by Virginia Republicans. It's certainly possible some form of "Operation Chaos" was afoot, but even a modest surge of Democratic crossovers in an open primary cannot explain the outcome or the margin of this race. Cantor straight-up got beat. Also, this:


(3) Everyone on Twitter immediately began assigning their preferred meaning to Cantor's loss, one of the most popular being that the Tea Party isn't dead. This is true. The GOP "establishment" has had a strong cycle, shepherding its candidates through the primary process this cycle in many key races, but recent upsets in Mississippi and now Virginia show that the Tea Party Right still wields influence over the Republican nominating process. Beware, though, of people taking credit for Dave Brat's victory. Some radio hosts and conservative media figures boosted him, but most national Tea Party groups stayed out of the race, which was written off as a lost cause. This was an authentic grassroots effort that took advantage of a low-profile, sleepy primary and an under-prepared incumbent (more on that later) to score a jaw-dropping win.

(4) Another fast-congealing piece of conventional wisdom is that immigration reform is dead. Cantor was a supporter of moving legislation on the issue, and Brat built up a good deal of his support (but not all of it) by flogging the issue. And yes, it's tough to imagine the Republican-held House of Representatives going anywhere near immigration any time soon. After Republicans' 2012 defeat -- fueled by abysmal support among non-white voters -- many elected officials within the party were terrified of not acting on immigration reform. Now, many of the same members are likely petrified of what the base might do to them if they go along with anything that has the faintest whiff of "amnesty." That's a significant sea change in perception, and perception is reality in politics. Might the tide turn again if Republicans get their heads handed to them by Hispanics in 2016? We'll see. Immigration reform is an intractable problem for the party right now: Its leadership believes that the absence of reform will kill Republicans' long-term electoral prospects (not without reason); its base believes that reform itself will kill Republicans' long-term electoral prospects (also not without reason). I'm not sure there's a way to reconcile that divide at the moment.

(5) Items three and four bring us to an important juxtaposition: On the same evening that Eric Cantor was unexpectedly thrown out on his ear by primary voters, Sen. Lindsey Graham (R-SC) won a landslide in his GOP primary, easily avoiding a runoff with challengers to his right -- in a very conservative state. Within the Republican orbit, Graham is basically the opposite of a Tea Party hero, and he's been one of the most vocal supporters of immigration reform for years ("Grahamnesty," and all that). The two big factors that supposedly ousted Cantor -- an ascendant Tea Party and anger over immigration -- didn't touch Graham. Why? Put simply, he worked his butt off. He took the pulse of his constituents, took nothing for granted, and worked relentlessly to batten down the hatches. Through tireless work, he earned an undramatic primary cake walk. Eric Cantor, on the other hand, clearly got blindsided. He was dangerously out of touch with the most engaged voters in his district, and he paid dearly for it. Part of that is a failure on the candidate's part; failing to recognize that something was brewing is an inexcusable political sin. Part of it was an historic face-plant by his staff and pollsters. They didn't feel it coming either, not even close. Granted, it's exceedingly tough to poll a primary race in a Congressional district for a number of reasons, but Cantor's internal polls showed him ahead by 34 points. They were only off by 44 percentage points. Campaigns matter.
(6) In spite of all the ideologically-motivated hand-wringing (and worse) about "money in politics," cash isn't everything. Cantor outspent Brat 25:1, and bought himself a big fat loss. How you spend your money is relevant of course, but what matters most is how the relevant electorate feels about you, and who turns out. Speaking of which, whomever ran Brat's turnout is likely receiving a few phone calls today.


(7) VA-07 should be an easy GOP hold (remember item one). It's an R+10 district, and the Democrat's website looks like this. Under sore loser laws, Cantor can't run as an independent, but he could pull a Murkowski and organize a write-in campaign. I've seen no indication that he intends to do so.


UPDATE - Cantor will step down as Majority Leader, effective July 31, touching off a leadership race that won't involve Paul Ryan.

UPDATE II - I discussed the race with Stuart Varney earlier this afternoon: