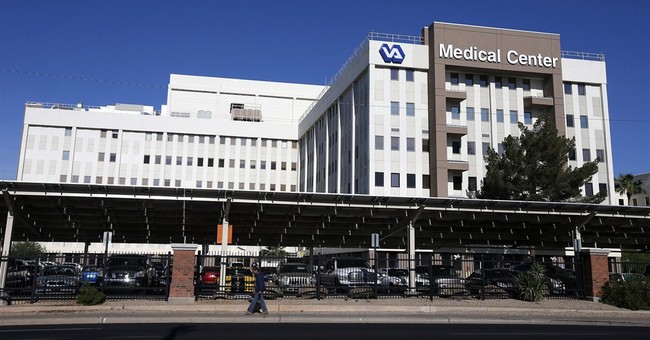 Meanwhile, in the VA scandal:

The Veterans Affairs Department says more than 57,000 patients are still waiting for initial medical appointments at VA hospitals and clinics 90 days or more after requesting them. An additional 64,000 who enrolled in the VA health care system over the past 10 years have never had appointments.


Tens of thousands of vets nationwide are currently languishing on waiting lists to secure doctors appointments. Tens of thousands more were never seen by doctors over the past decade. CBS News has additional details on the initial internal audit's findings:

Examining 731 VA hospitals and large outpatient clinics, the audit found long wait times across the country for patients seeking their first appointments with both primary care doctors and specialists. The audit said a 14-day target for waiting times was "not attainable," given growing demand for VA services and poor planning. It called the 2011 decision by senior VA officials setting it, and then basing bonuses on meeting the target "an organizational leadership failure." ... The audit released Monday said 13 percent of VA schedulers reported getting instructions from supervisors or others to falsify appointment dates in order to meet on-time performance goals. About 8 percent of schedulers said they used alternatives to an official electronic waiting list, often under pressure to make waiting times appear more favorable. Acting VA Secretary Sloan Gibson said the audit showed "systemic problems" that demand immediate action.


Again, these are preliminary numbers from the agency itself. More:

They're scrambling to deploy non-combat MASH units to see vets who've been cast into appointment purgatory:


That seems like an unusual (and certainly not a permanent) solution, but at least it's something. Ed Morrissey suggests that observers shouldn't necessarily take the VA's investigation of itself at face value, citing an unsparing McClatchy article detailing the agency's culture of cover-up:

Fixing the sprawling agency with an entrenched bureaucracy won’t be easy. It has a management culture marred by cronyism, intimidation and poor oversight from the Department of Veterans Affairs central office. It has a performance-based bonus system that rewards those who falsify records to meet unrealistic quotas. And it simultaneously penalizes supervisors who don’t push their employees to “cook the books.” [Former VA worker Charleston] Ausby said he and his co-workers routinely came under pressure to reduce the VA’s record disability-claims backlog by misfiling or mislabeling old claims that had been pending for years to make them appear in the computer system as though they were new claims. Like “cooking the books” at VA hospitals to conceal delays in medical care, the practice of manipulating claims data made it seem as though veterans weren’t waiting as long for decisions on their benefits as they really were, Ausby said. Most underlings are too demoralized to complain or don’t know how to do so without risking retribution, he said.


Did you catch that? Ausby describes overt manipulation on the disability claims side of VA dysfunction. If the president should have been aware of the scheme to hide medical wait times (his transition team was warned of the problem, with numerous investigations and reports surfacing in subsequent years), he was absolutely aware of the disability claims backlog -- which he made a major issue in the 2008 campaign. The backlog has gotten worse on his watch, and depending on how rampant the alleged abuse has been, the reality may be significantly worse than the already-bad public stats indicate. Veterans are also warning that the VA's flaws extend far beyond wait times. The Denver Post files this harrowing report:


Two years ago, Navy veteran Michael Beckley learned that Veterans Affairs had repeatedly missed his prostate cancer. He said he got the news in a room "the size of a broom closet." In a hospital hallway, he had caught up with the urologist who tested him, and he asked for the results. The doctor took him into the closest room, told him the news was bad and said he was too busy to explain the test numbers. "Google it," he advised. Beckley, a former fighter pilot, sat on the floor and cried. Having experienced a decade of frustration with the VA, he demanded to see the administrator. "This hospital — you guys — killed me," he said. Instead, he said, a team of federal police officers led him out of Denver's VA hospital. The scandal rocking the VA centers on delayed care and falsified appointment records, but critics say the problems run deeper — to quality of care and patient safety at many of the department's 1,700 health care facilities...A VA fact sheet released in April identified at least 23 veteran deaths since 2010 linked to delays in just one category of care — gastrointestinal examinations to detect colon cancers — including a death at the VA medical center in Grand Junction.


"Sorry, you actually do have cancer, sir -- it's really bad, but I don't have time to explain. Look it up. Oh, and please leave the building. You're making a scene." Disgusting. We're also learning of horrific sanitary conditions at some VA facilities, as well as serious questions about the VA's capacity to compassionately and efficiently deal with veterans battling mental health issues (an issue we touched on recently). A bipartisan VA reform bill is coming together in the Senate, and it includes some good ideas. But any root-and-branch reform effort must re-make the agency's deeply-ingrained attitude and culture, and it's not as simple as setting new benchmarks and tossing more cash at the problem. Imperious Beltway mandates are what accelerated the wait list corruption in the first place, and a rapidly-inflating budget clearly wasn't allocated effectively. Is systemic reform, including the reversal of endemic flaws, even possible within a sprawling, unaccountable bureaucracy?