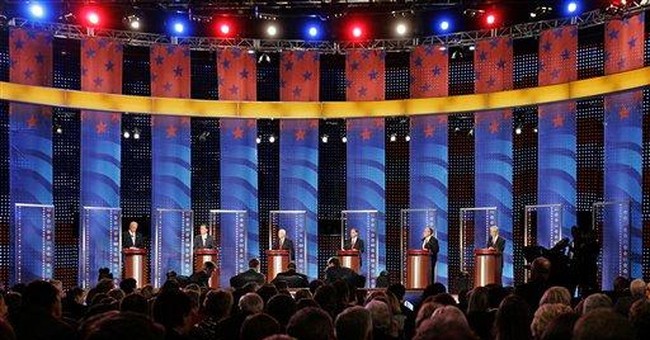 The Fox News Channel has released their 2016 primary debate rules. As of this writing, the top ten Republican contenders will be invited to participate.

Strangely, however, as the blog FiveThirtyEight notes, the network refuses to release which polls will be selected -- and averaged -- in order to determine the rankings. This complicates matters, of course, rendering it impossible to predict, at this early stage, who would merit an invitation -- and who would not.

And yet, up in New Hampshire, Granite State Republicans are far less concerned about the details of the debate than the rules in general. As a matter of fact, they recently penned a joint letter, signed by 50 “prominent” GOPers, calling on Fox News to reexamine and revisit their debate policies:

More than 50 prominent Republicans in New Hampshire want Fox News to change the format of its Aug. 6 presidential debate so every candidate can participate. For the first scheduled GOP debate, host Fox plans to restrict it to the top 10 candidates, based on polling averages from the five most recent national public opinion surveys. But the field could approach 20 candidates, posing logistical challenges as TV networks and the party decide how the debates should unfold.

In a letter to the heads of Fox News and the Republican National Committee, the New Hampshire group suggests that Fox split the debate into two panels. Three of the top six candidates would be on one panel, and the other top three contenders would be on the second one. The remaining contenders would be assigned randomly to a panel. The group suggests broadcasting the two panels back to back or on consecutive nights.

Not the worst idea, I suppose. First of all, everyone in the running would get some airtime. In the spirit of fairness, this would give all candidates a chance to make their case to the American people. Second, it would protect the network from charges of favoring certain candidates (or excluding others). And finally, it would (maybe) bring in more revenue. More debates, after all, means better ratings.

All that being said, there’s something patently ridiculous about allowing all 20 candidates to participate in nationally televised presidential debates, many of whom are not serious contenders. Do we really want candidates polling at, say, one percent nationally (or less) on stage? And if not, where should the network draw the line?

Schumer Just Blocked an Election Security Hearing to Boycott SCOTUS
Katie Pavlich
Biden: I Was Against Court Packing Earlier in This Campaign, But Now I Have No Comment
Guy Benson
Too Tired? Biden Called It a Day Before 10 AM Today...42 Days Before Election Day AND During a SCOTUS Fight
Matt Vespa
McConnell Reacts to Reporter's Suggestion He Listen to RBG's 'Dying Wish'
Cortney O'Brien
Joe Biden is Hiding His Supreme Court Picks, Senator Cotton Explains Why
Katie Pavlich
McEnany Fights Back Against Democrats' 'Search and Destroy' SCOTUS Tactics
Katie Pavlich
CARTOONS | AF Branco
View Cartoon
Most Popular