Election Experts: There Are Only Three Serious GOP Contenders 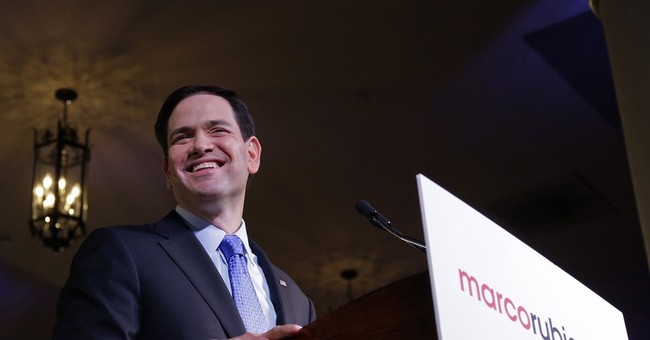 In a field brimming with candidates, the University of Virginia’s Larry Sabato and his associates contend in the pages of Politico Magazine, the “conventional wisdom” is that the Republican presidential nomination is up for grabs in 2016.

[The] closeness of the race is a mirage, a false projection of the reality that exists just below the surface. At this very early stage, when every week more candidates declare, the public is mainly not engaged—not even the select contingent of voters that will turn up to cast ballots in the caucuses and primaries. Republicans are hungry to reoccupy the White House, and the realistic among them understand the party won’t win without pitching a bigger tent. There may be no single GOP frontrunner, but there are just a few politicians who have the resources, positioning and potential to expand the base. They are former Florida Gov. Jeb Bush, Florida Sen. Marco Rubio and Wisconsin Gov. Scott Walker, not necessarily in that order.

In other words, candidates like Ted Cruz, Rand Paul, and Ben Carson aren’t even dark horse contenders for the nomination; they're political losers and they don't even know it yet. That’s an intriguing (if brutally honest) contention — and if true — would disappoint many conservative grassroots activists who harbor high hopes for their preferred candidates.

Nevertheless, perhaps these experts are right that the field is much smaller than currently meets the eye. Surely, however, some of the hopefuls in the race have no business running for president. They’re either clenching to unrealistic (and delusional) visions of someday sitting in the Oval Office — or they have ulterior motives, such as earning a cabinet position or a spot on the national ticket.

And yet, Sabato and his colleagues caution, if Republicans have any interest in breaking their two-cycle losing streak, they should probably rally around one of these three contenders — or risk everything:

...A few will manage to win some primaries or caucuses. But if winning in November is the goal, Republicans will settle on Bush, Rubio or Walker. Some of the other candidates are too far right to win swing states, others are controversial and divisive within the party itself, still more are novices who have never held elective office, or retreads and golden oldies whose time has passed. It may look like an enormous, amorphous field of candidates, but already it’s clear that three candidates loom large.

What do you guys think? Does another Republican candidate have the capacity, connections, and money to win the primary and the general election? Or do Republicans need to endorse one of these three contenders to finally recapture the White House?