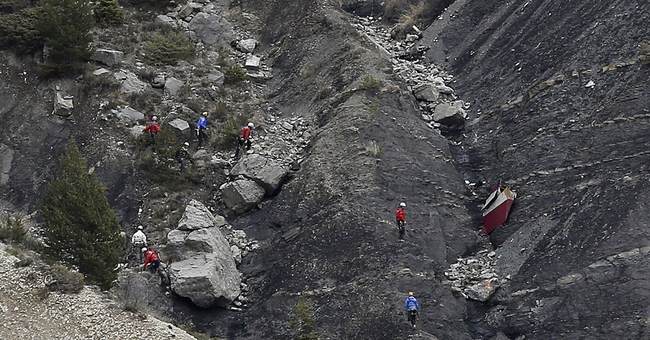 An important update to my item from yesterday: Tragically, it has officially been determined that two American citizens lost their lives after a German airliner unexpectedly crashed yesterday in a remote area of the French Alps.

A mother and her adult daughter from suburban Washington, D.C., were identified Wednesday as the two Americans aboard the Germanwings plane that plunged into a French Alps mountainside.

Yvonne Selke and daughter, Emily, of Nokesville, Virginia, were named as the Americans on doomed Flight 4U9525, NBC News has confirmed. The plane crashed Tuesday en route from Barcelona, Spain, to Dusseldorf, Germany, killing all 150 passengers and crew, officials said. Investigators found one black box and the frame of another black box from the Airbus A320, which was pulverized upon impact in a remote area of the Alps.

The U.S. State Department, for its part, released a statement yesterday offering condolences to those affected by the tragedy:

We are saddened by the news that Germanwings flight 9525 crashed in southern France on its way from Barcelona, Spain, to Dusseldorf, Germany. We extend our deepest condolences to the families and loved ones of the 150 people on board. We are reviewing whether any U.S. citizens were aboard the flight. The United States stands ready to offer assistance and support to the Governments of France, Germany, and Spain as they investigate this tragedy.

After conducting their review, however, the State Department announced more grim news today:

A third U.S. citizen was on board the Germanwings flight that crashed in the French Alps this week, the U.S. State Department said on Wednesday.

Spokeswoman Jen Psaki said officials have confirmed that Americans Yvonne Selke and her daughter, Emily, were among those killed in the crash. Psaki said the third U.S. citizen is not being named at this time.

All in all, there were citizens from more than a dozen different countries aboard that flight. Horrible. Meanwhile, little progress has been made about why the flight went down in the first place:

Lufthansa, the parent company of Germanwings, has characterized the crash as an accident. But as investigators reviewed one of the plane’s so-called black boxes, questions remained, including why the aircraft had descended for eight minutes before crashing, and why an aircraft with a good safety record had crashed in largely clear weather.

At least for now, the cause of the crash remains a baffling mystery.

UPDATE: Fox News reports that (a) human remains and debris are scattered across the length of "two stadiums" and (b) investigators can only access the crash site via helicopter. Hence, it is expected to take several weeks, if not longer, for officials to conclude their investigation.