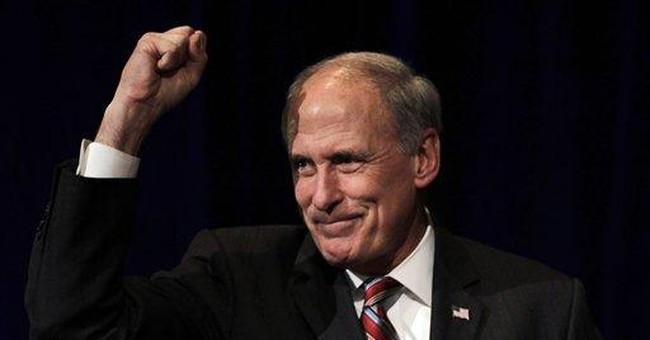 Sen. Dan Coats (R-IN), the ex-congressman and ambassador who served two separate stints in the U.S. Senate, announced today he is retiring after the current session.

“Today I am announcing that I will not seek re-election to the United States Senate,” he said in a statement on Tuesday. “This was not an easy decision. While I believe I am well-positioned to run a successful campaign for another six-year term, I have concluded that the time has come to pass this demanding job to the next generation of leaders.”

“Until the end of my Senate term," he added, "I pledge to my constituents that I will continue to focus all of my time and energy on the major challenges that Hoosiers sent me to Washington to address.”

Meanwhile, as a result of Coats’ announcement, Roll Call has provisionally adjusted the probability of Republicans keeping the seat red heading into 2016:

GOP Sen. Dan Coats’ retirement creates a takeover opportunity in Indiana next year. But Democrats will likely need some breaks to move the race from a potential gain to a top-tier contest.

Coats would have started the race as a clear favorite for re-election, but now that he is retiring, his open seat could become competitive. We’re shifting The Rothenberg & Gonzales Political Report/Roll Call rating of the Indiana Senate race from Safe Republican to Favored Republican until the candidate fields on start to take shape. The new rating reflects both the state’s fundamental bent and the lack of a proven incumbent.