Poll: Favorability Ratings For Both Parties Trending Near Historical Lows 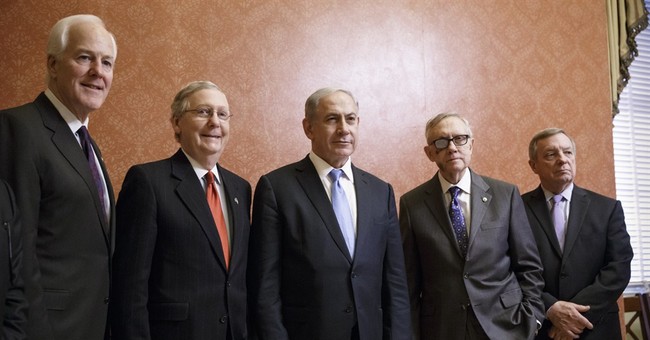 “Thirty-seven percent of Americans now view the Republican Party favorably and 39% view the Democratic Party favorably,” the pollsters report. “This is the only time since Gallup began tracking the party's images this way in 1992 that neither party has achieved at least 40% favorability from the public."

Over the past two-plus decades, Republican and Democratic favorability ratings have ebbed and flowed. The poll finds, however, that Democrats reached historic lows shortly after the shellacking they took at the ballot box last year; Republicans reached it back in the late 1990s, after congressional Republicans tried and failed to prematurely end Bill Clinton's presidency, according to the pollsters. Most significantly, perhaps, the boost in approval ratings Republicans supposedly gained after exceeding all expectations in 2014 has all but evaporated. Their favorability ratings have collapsed five points already in just as many months. The pollsters summarized the findings thusly: “For some time, numerous Gallup trends have been showing Americans largely displeased with [the] government's performance and leadership,” they write. “Through it all, at least one political party was reviewed well, but now -- perhaps because of the constant brinksmanship going on between Obama and the Republican Congress, but maybe for other reasons -- both parties are floundering.”

And perhaps will continue to for the foreseeable future.

Fake News: CNN Eats the Pavement for a COVID Vaccine Story So Bad...Even Their Hosts Didn't Believe It
Townhall
'I am sickened': Thousands of National Guard troops in DC reportedly 'banished to the corner of a parking garage'
Twitchy
'We Feel Betrayed': Thousands of National Guardsmen Tossed Out of Their Rest Areas In Capitol
Redstate
The WHO Finally Updates Its COVID-19 Testing Policy... One Hour After Biden's Inauguration
PJ Media