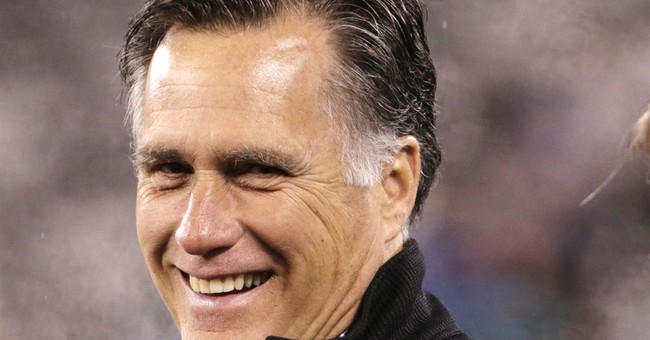 By a two-to-one margin, respondents who participated in a recent CBS News poll overwhelming say Mitt Romney should answer the call one last time and run for president:

Fifty-nine percent of Republicans would like to see Romney jump into the 2016 race, while only 26 percent believe he should stay out, according to the CBS News poll.

Fifty percent of Republicans would like to see former Florida Gov. Jeb Bush on the campaign trail as well, while 27 percent disagree. If both Romney and Bush run, analysts expect them to wage a competitive battle for the allegiance of the Republican establishment.

On the other hand, voters are way less enthused about the more right-leaning candidates taking the plunge:

A trio of Republican senators who have stoked the enthusiasm of the grassroots have mixed numbers. Twenty-seven percent of Republicans would like Kentucky Sen. Rand Paul to mount a bid, but 34 percent disagree. Twenty-six percent would like Florida Sen. Marco Rubio to run, while 19 percent would not. Twenty-one percent want Texas Sen. Ted Cruz to run, while 25 percent want him to not run.

Speaking of Cruz, he just basically confirmed he’s running for president in 2016:

Team Ted Cruz is taking shape, and the Senate first-termer's presidential campaign could start before this spring.

The Republican senator from Texas tentatively plans to fill senior campaign positions with the triumvirate he signed last summer to expand his political operation. At the top is Jeff Roe, whose organizational title is undefined but who would be the campaign’s chief strategic and logistics decision-maker. Jason Miller would shape and oversee campaign messaging; Lauren Lofstrom would direct fundraising.

Cruz is in the process of “feeling out” additional campaign hires and prospective donors in preparation to join the field of 2016 candidates. If the senator decides to run for president, he wants to hit the ground at full speed, a senior Cruz advisor confirmed Monday.

I suspect this will be the argument on which his candidacy will hinge. The last time Republicans nominated a genuine conservative, he’ll argue, Republicans went on to control the White House for 12 straight years. At the same time, he’ll continue to point out the obvious -- namely, that without grassroots support, the GOP cause is hopeless. Only after nominating a principled conservative can Hillary Clinton hope to be defeated.

We’ll see how much this message resonates. But what will be interesting to see is if conservatives ultimately dub Cruz their 2016 standard-bearer, or whether they’ll go with someone else.

Correction: I've updated and fixed my headline. Apologies for the error.

We the Reasonable Are Outnumbered – And Massively Outgunned
Redstate
Is tonight’s debate over before it begins?
Hotair