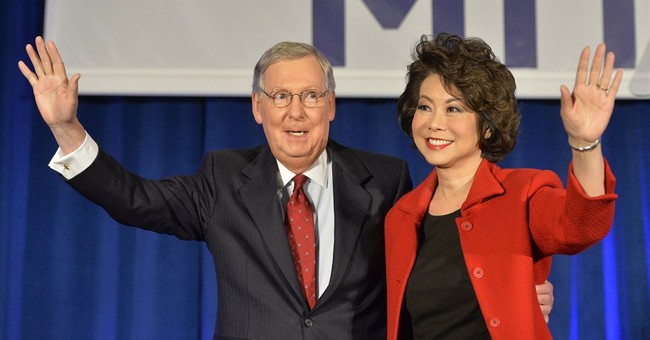 Senate Minority Leader Mitch McConnell (R-KY) – who handily and impressively won re-election last night – spoke to reporters today about how the federal government will function after Republicans retake majority-control of the US Senate next session.

“[The American people] are obviously not satisfied with the direction of the administration,” he began. “But at the same time, I’ve heard a lot about dysfunction in Washington.”

And therefore, he said, he’s already been in contact with leaders from both parties to smooth the transition.

“Earlier today I got a call from the president, [Sen.] Reid and the Speaker – and Ted Cruz too, which I thought you’d be interested in,” he said, “all of whom I think have the view we ought to…look for areas of agreement.”

At which point he gently reminded the public that Republican control of both chambers of Congress does not necessarily augur gridlock and partisanship. Specifically, he invoked the fact that President Ronald Reagan and House Speaker Tip O’Neill worked together in the 1980s to save Social Security “for a generation,” and President Bill Clinton and Congressional Republicans successfully passed welfare reform and a balanced budget the following decade.

But that cannot happen, he cautioned, unless the Senate returns to regular order.

“From an institutional point of view, the Senate needs to be fixed,” he said. “The committees need to be relevant again.”

He also mentioned several areas where Congressional Republicans and the president can work together to move the country forward. He explicitly mentioned passing the Keystone XL pipeline, expanding international trade agreements, and securing tax reform as well within the realm of possibilities. Moreover, he also left the door open to repealing certain elements of the Affordable Care Act – namely, the medical device tax and the individual mandate.

“There are obviously going to be areas of disagreement…that’s not unusual since the founding of the country,” he said. “But we’re going to function.”