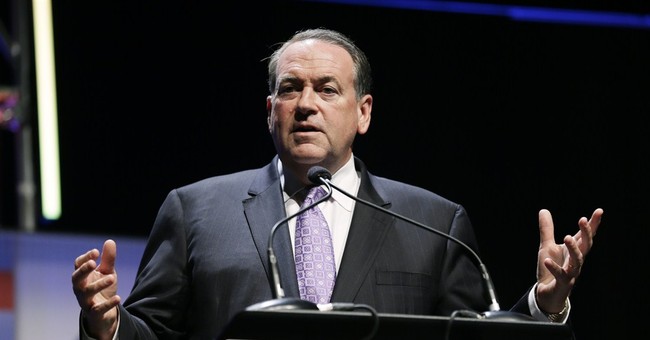 Two things are worth noting in the CNN/ORC survey released Friday vis-à-vis the 2016 presidential sweepstakes: (1) Hillary Clinton, who is gearing up to head to the Hawkeye State as I write this, is leaps and bounds ahead of her fellow Democrats; and (2) former Gov. Mike Huckabee is leading all of his presumed GOP rivals by double digits:

According to a new CNN/ORC poll, 53% of all registered Democrats contacted in Iowa said they would support Hillary Clinton if the 2016 caucuses were held today. That number far outpaces the 15% that would opt for Vice President Joe Biden, 7% who would choose Sen. Elizabeth Warren and 5% who would pick Sen. Bernie Sanders. ...

On the Republican side, Mike Huckabee nearly laps the field with 21% of all registered Republicans contacted in the poll saying they would support the former Arkansas governor if the 2016 Iowa caucuses were held today. Paul Ryan is second with 12%, and there is a cadre of politicians -- including Sen. Rand Paul, former Florida Gov. Jeb Bush and New Jersey Gov. Chris Christie -- with support in the single digits.

The reason why Huckabee is soaring? Well, in part because more than one-quarter of all registered Republicans who are women prefer him over everyone else:

Huckabee and Ryan are getting similar support with men -- 15% and 16%, respectively -- but it is with women that the former Arkansas governor jumps ahead of the congressman. Twenty-seven percent of registered Republican women polled said they would pick Huckabee, compared with 8% who choose Ryan.

Perhaps one reason why Huckabee is ahead, and has been for a while now, is because his unique brand of social conservatism is popular among social cons in the state. Or, perhaps, because he’s already won the Iowa caucuses before and therefore has great name recognition among voters. Whatever the case may be, however, he hasn’t yet definitely ruled out forming an exploratory committee. But if Mitt Romney doesn't run, and the former governor continues to blow away the competition in Iowa, I honestly can't see why he wouldn't.