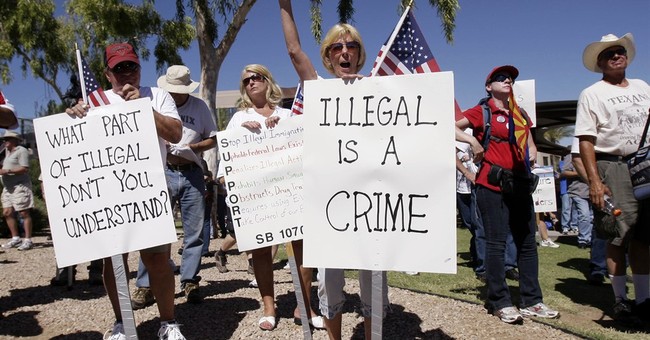 Through an executive order known as the Deferred Action for Childhood Arrival (DACA), President Obama announced on June 15, 2012 that certain illegal immigrants -- namely, children who came to this country illegally before the age of 16 and met certain other requirements -- would be allowed to stay for up to two years. They cannot become permanent residents or citizens, of course, but DACA is renewable and has been recently reauthorized for another two years. This, supporters argue, affords children who entered the country illegally through no fault of their own a chance to attain and live the American Dream.

Today, however, the president is hosting 10 of these so-called “DREAMers” at the White House, presumably to raise awareness about the program and to tout their successes and contributions to American society:

The White House will honor 10 young adults on Tuesday who came to the United States illegally and qualified for the president’s program to defer deportation actions.

Each person has qualified for the government’s Deferred Action for Childhood Arrival program, which delays removal proceedings against them as long as they meet certain guidelines.

They will be honored as “Champions of Change,” the White House said in a statement Monday because they “serve as success stories and role models in their academic and professional spheres.”

In 2012, President Obama created DACA through an executive order, which defers any action on the status of people who came to the U.S. illegally as children for two years and can be renewed. DACA doesn’t provide any legal status.

The debate over fixing our broken immigration system is largely about process and fairness. To that end, one of the chief reasons why the Senate Immigration Reform bill went down in flames last year is because it failed to secure the border. Conservatives have long maintained that border security must come first in any ‘comprehensive” deal (although many conservative lawmakers prefer the piecemeal approach), and triggers must be in place to verify that the border is indeed secure. As we’ve seen in recent weeks, failing to secure the border not only threatens our national security, but leaves children and families susceptible to exploitation and sexual abuse at the border.

There’s also the issue of granting illegal immigrants temporary status before those who’ve waited in line for years and followed the law. Is that fair? Of course, the debate over what to do with the children of illegal immigrants is particularly vexing. They didn't necessarily choose to come here. But it’s one thing to grant DREAMers temporary status so they can make a living for themselves in their adopted home country, as controversial as that might sound; it’s quite another to parade and flaunt them at the White House when so many others have waited patiently in line to immigrate lawfully to the United States.

This ceremony, then, strikes me as an insult to them, not to mention the lawmakers the president shamelessly circumvented when he made his executive order official administration policy. Remember, he had two years to pass a comprehensive immigration reform bill when Democrats controlled both chambers of Congress. He didn’t. Now, it seems, he’s simply making up for lost time.