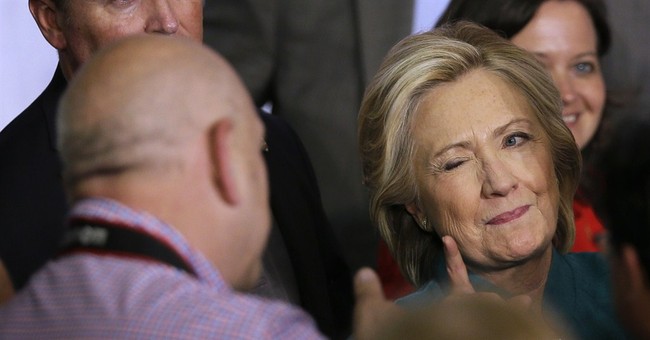 Hillary Clinton just became the last Democrat to opine about the much debated Trans-Pacific Partnership (TPP), which failed to pass the House last Friday. Both the support and opposition for TPP had been unusually bipartisan, with President Obama and Republican leaders linking arms to try and pass the measure.

Hillary Clinton had withheld her views on TPP throughout the entire legislative battle — until yesterday. Speaking to supporters in Iowa, she said:

“The president should listen to and work with his allies in Congress, starting with Nancy Pelosi, who have expressed their concerns about the impact that a weak agreement would have on our workers to make sure we get the best, strongest deal possible. And if we don’t get it, there should be no deal.”

While opposing TPP in its present form, she implied that she would support a version without the "objectionable parts."

If that seems like a vague position, that's because it is. Sen. Bernie Sanders criticized Clinton's timid unwillingness to become mired in the policy debate.

Leading up to Sunday, Vermont Sen. Bernie Sanders, also a presidential candidate, accused Clinton of a “cop-out” in not clearly affirming her position on the trade bill. “I, frankly, don’t understand how you could be a major president of the United States – Hillary Clinton or anybody else – and not have an opinion on that issue,” Sanders said on PBS.

She also took heat from Republicans.

“Hillary Clinton’s failure to actually take a position on trade is yet another indication she’s running an overly-cautious campaign that’s terrified of the far-left of her Party,” said Jeff Bechdel, communications director for America Rising, a conservative opposition research super PAC.

The Clinton campaign has defended her, saying she wants to learn more about the trade bill before staking out a position. But perhaps her position is actually fairly simple: Just be on the winning side.