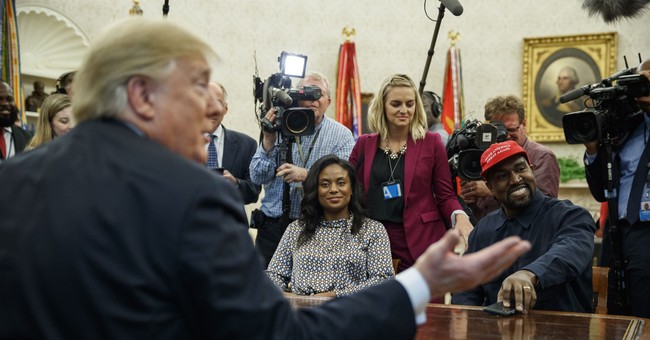 Fox News warned its viewers Thursday that the network could not play the entire audio of Kanye West's visit to the White House, because he let a few expletives fly. It was easy to believe from the video, judging by his animated motions while sitting across from President Trump.

Once Fox edited the clip, we heard some of West's exuberant 10 minutes in the Oval Office.

Kanye West: “It is good energy in this.” pic.twitter.com/1cYMtYSV0w

"We've got to open up the whole conversation," West said, before blaming liberals for trying to "control a black person through the concept of racism."

One reporter asked West what he wants to see happen in Chicago. The artist suggested that stop-and-frisk "does not help the relationships" in the city. Trump, who recently touted stop-and-frisk, told West he is willing to talk about other solutions.

"I have an open mind," Trump assured him.

What could help Chicago, West said, was the opening up of industries and tax breaks.

"We need prototypes so we can start working again," he said. West said they need to create factories. "I think it would be cool to have Trump factories," he suggested.

Another reporter asked the rapper about the role of gun control in the debate.

"The problem is illegal guns, not legal guns," West responded. "We have the right to bear arms."

West couldn't help praising the man across from him.

"Trump is on his hero's journey," West said.

"He can speak for me anytime he wants," Trump said, gratefully. "He's a smart cookie."

"I love this guy right here!" West said, before giving him a huge hug.

Kanye West: “I love this guy right here. Let me give this guy a hug.” pic.twitter.com/fuHyzkW37X

Bonus: Here's Kanye explaining why his MAGA hat makes him feel like "Superman."

“I love Hillary. I love everyone, but the campaign ‘I’m with her’ just didn’t make me feel — as a guy … it was something about this hat that made me feel like Superman,” ––Kanye Westpic.twitter.com/T6vMD7563C