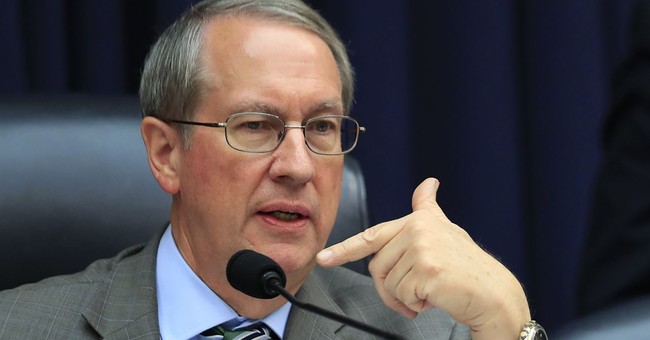 House Judiciary Committee Bob Goodlatte (R-VA) sparred with former FBI agent Peter Strzok during his July hearings. Strzok refused to answer certain questions about the thousands of biased, anti-Trump texts he sent his mistress Lisa Page during the 2016 presidential election. Strzok was also the lead agent on the FBI’s Russia investigation at the time. Once the politically compromising texts were found, Strzok was removed from the investigation. Goodlatte demanded answers from Strzok when he sat before his committee because he was under subpoena.

A few weeks after those testy hearings, Strzok was "finally!" fired Monday morning.

Goodlatte's son Bobby, far from being impressed, was disappointed in his father's behavior and how it led to Strzok's departure.

I’m deeply embarrassed that Peter Strzok’s career was ruined by my father’s political grandstanding. That committee hearing was a low point for Congress.

Thank you for your service sir. You are a patriot https://t.co/3dNN3AlXCZ

The younger Goodlatte didn't stop there. He has also reportedly donated to his dad's Democratic opponent in Virginia's 6th congressional district ahead of the midterms and encouraged others to do the same.

I just gave the maximum allowed donation to Jennifer Lewis, a democrat running for my father's congressional seat. I've also gotten 5 other folks to commit to donate the max. 2018 is the year to flip districts — let's do this! https://t.co/bYCKta2Bhs

One social media user summed it up best when he mused, "Thanksgiving dinner is gonna be really awkward at your house this year."