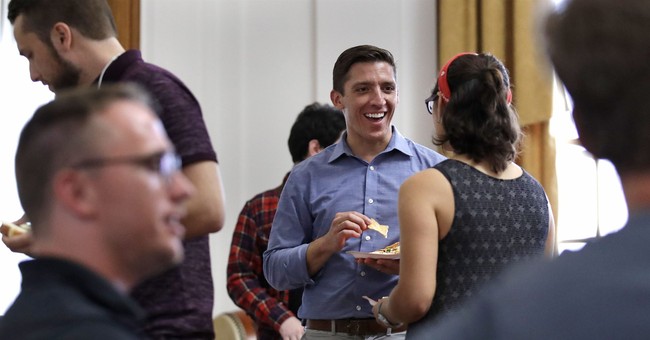 Every time a Democrat voices support for socialism, it's music to Republicans' ears. The GOP is under the impression that voters will not warm to the progressive, radical agenda. Still, that fear has not stopped a growing number of Democrats from diving head first in to the progressive movement. Alexandria Ocasio-Cortez, a 28-year-old who believes in abolishing ICE and single payer health care, scored an upset victory against Rep. Joe Crowley (D-NY) in New York's 14th congressional district race last month.

The progressive fever has reached a Senate campaign in Maine too. Democratic Senate candidate Zak Ringelstein is now "the only major-party Senate candidate to be a dues-paying democratic socialist," according to the Associated Press.

“I stand with the democratic socialists, and I have decided to become a dues-paying member,” Ringelstein said. “It’s time to do what’s right, even if it’s not easy.”

Just a week ago, Ringelstein said he "wasn't ready" to officially join the socialist cause, according to the AP. With his quick change of heart, the Democratic Socialists of America are proud to announce that they have endorsed 42 candidates at the federal, state and local levels.

Sen. Bernie Sanders (I-VT), who has endorsed Ocasio-Cortez, joined her at a rally over the weekend in Kansas for congressional candidate James Thompson to declare that ideas once considered "radical," like Medicare for all, are now officially "mainstream."

“With allies like Alexandria and James in the Congress, we are going to pass a Medicare-for-all, single-payer program,” Sanders said. “And please understand that this idea of Medicare for all – this is not a radical idea.”

Not all Democratic leaders would agree. House Minority Leader Nancy Pelosi, for example, has been trying to paint Ocasio-Cortez's win as an outlier.

"They made a choice in one district," Pelosi said. "So let’s not get yourself carried away as an expert on demographics and the rest of that."

"Because the policies Ms. Ocasio-Cortez advocates are so far from the mainstream, her election in November would make it harder for Congress to stop fighting and start fixing problems," he wrote.

Will the likes of Ocasio-Cortez and Zak Ringelstein derail the Democrats' chances to retake Congress this fall?