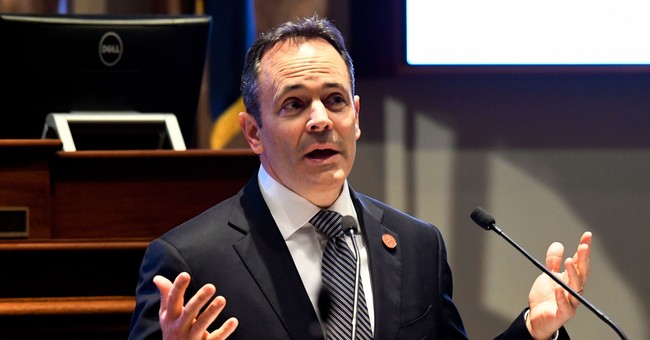 Kentucky Gov. Matt Bevin (R) is hitting back at a district judge who last week ruled his administration could not force Medicaid recipients to earn their health benefits. Kentucky is one of 32 states to expand Medicaid to include able-bodied adults under President Obama's tenure. Bevin had wanted some of those adults to work or volunteer at least 20 hours a week and pay monthly premiums to keep their health coverage. U.S. District Judge James E. Boasberg rejected those work requirements last week, however, suggesting Bevin and the Trump administration did not consider how many people stood to lose benefits.

In response, Bevin announced this weekend he's canceling dental and vision coverage for almost 500,000 enrollees in the state’s Medicaid expansion. Instead, those individuals could earn points to pay for services through a "My Rewards" account by completing activities such as online classes or volunteer work.

The judge gave them no choice, Bevin's cabinet argued.

The ruling means there is no longer a “legal mechanism” in place to pay for dental and vision coverage for about 460,000 Medicaid beneficiaries, the state’s health and family services cabinet said in a weekend statement.

“This is an unfortunate consequence of the judge’s ruling,” the cabinet said. “Once we ultimately prevail in this legal challenge … then beneficiaries will have access to these optional services.”

"We are concerned about rash decisions made in response to the court ruling," said state Rep. Joni Jenkins. "We call for thoughtful discussions involving the administration and the many statewide stakeholders in the path forward in assuring Kentucky's working families have healthcare."

Others say Bevin's latest move is not even legal.

“He said he wants to take dental and vision coverage away,” Rep. John Yarmuth (D) said Monday at a press conference. “We don't think that's legal either.”