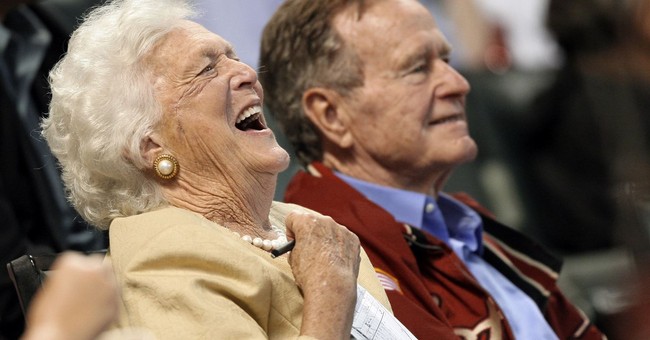 The funeral service for former First Lady Barbara Bush at St. Martin's Episcopal Church Saturday was more of a celebration than a day of mourning. From George H. W. Bush's playful socks to humorous homilies from clergy, it was clear that Mrs. Bush had a contagious optimism.

The socks worn by the 41st President of the United States of America at today’s funeral for former First Lady Barbara Bush. pic.twitter.com/12libHt1Jv

Rev. Dr. Russell Levenson, Jr., a friend of the Bushes, officiated the funeral and gave an uplifting homily full of playful anecdotes about Mrs. Bush. Boy did she have some zingers.

Rev. Dr. Russell Levenson, Jr.: "A fellow came up to her and said, 'Hey, you look a lot like Barbara Bush,' and without missing a beat, Barbara just said, 'Yes, I hear that a lot.'" https://t.co/K0uzjBlb4g pic.twitter.com/PMYbldMKnJ

"The word 'offering' came to mind and then I heard Barbara saying, 'don't even think about it,'" Levenson joked.

The reverend had plenty of funny stories to choose from, but he settled on just a few, including the time her dog accidentally bit his wife in the calf. The next day, Mrs. Bush had sent flowers to his wife with a note: "Dear Laura, I'm so sorry about the bite. You just looked good enough to eat!"

Former New Hampshire Gov. John Sununu said Mrs. Bush's funeral was "the least sad" funeral he had ever attended. It was, he said, "a positive celebration of life."

Mrs. Bush's dry humor was on display even in her final hours. Former President George W. Bush shared that his mom was joking with her doctor last weekend. Why, she asked the doctor, did he think her son had turned out the way he did? "Because I drank and smoked while I was pregnant with him.”

Mrs. Bush and her humor will be missed!

Of course, in his homily, Rev. Levenson also reflected on Mrs. Bush's decency, humility, and her ability to make friends with all thanks to her "generosity of spirit."

President George H. W. Bush was admitted to the hospital this weekend for a blood infection. Thankfully, he is in the recovery stage.