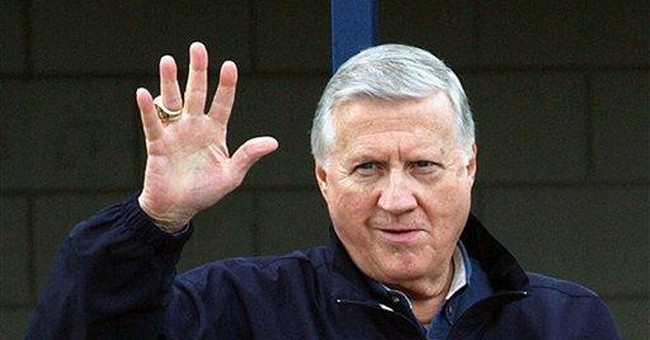 As so often happens in tragedy, we are able to witness glimpses of kindness rarely seen in today's often selfish society. New York is still reeling from the deaths of two New York Police officers, who were killed 'execution style' in their squad cars on Saturday. Officers Wenjian Liu and Rafael Ramos leave behind wives and one child just days before Christmas.

Without a husband, Lucy Ramos would likely have to start thinking about how she would raise a child by herself.  That's where the New York Yankees came in. In an incredible act of generosity, the famous baseball team has offered to pay for her child's education:

A foundation founded by late New York Yankees owner George Steinbrenner reportedly will cover the education costs for the sons of one of the two NYPD officers murdered in a daylight ambush Saturday afternoon.

The New York Daily News reported that the Yankee Silver Shield Foundation will pay for the education of Officer Rafael Ramos' 13-year-old son Jaden and another son who is in college.

Although she is in mourning, surely Mrs. Ramos felt comforted by this unexpected and pleasant surprise. Truly, a class act.

The murderer's decision to fire on these innocent police officers will be remembered as an act of cowardice, which was stirred on by a culture of anti-cop mentality following the unpopular grand jury decisions in Ferguson, Missouri and New York. I pray this fatal incident will encourage protesters to put down their hateful signs, and go home.

"Today I had to say bye to my father. He was their [sic] for me everyday of my life," the post read. "He was the best father I could ask for. It's horrible that someone gets shot dead just for being a police officer. Everyone says they hate cops but they are the people that they call for help. I will always love you and I will never forget you. RIP Dad."