One Class Act in the NFL 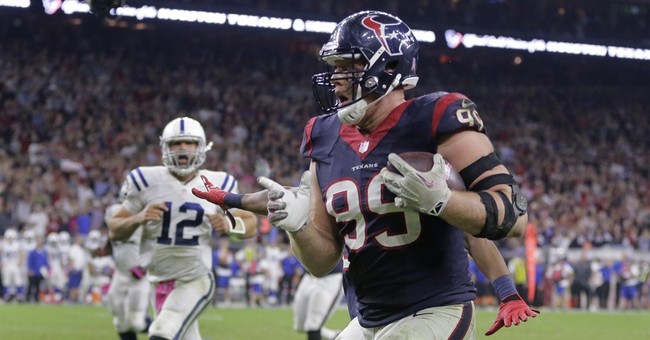 Ray Rice and Adrian Peterson may have cast an unfortunate shadow on the National Football League this year, but don't let that convince you there's no decency left on the football field. Houston Texans' J.J. Watt made a classy move last week when he showed his appreciation for local law enforcement. Here's proof:

Pizza delivered to our fire station thanks to @JJWatt. Thanks for your support and the delicious lunch! #PapaJohns pic.twitter.com/9aYjA0PJpN

This isn't the first time Watt has earned his 'good guy' status. Former Townhall Magazine editor Elisabeth Meinecke wrote a piece on the NFL earlier this month in which she highlighted Watt's efforts to combat bullying and basically make children's days.

Despite anomalies like Rice and Peterson, who were right to be punished for their shameful violence, research reveals that playing in the NFL has little correlation to violence off the field, especially when placed in the context of the national trend.

Kudos to Watt for doing his part to restore the NFL's reputation.