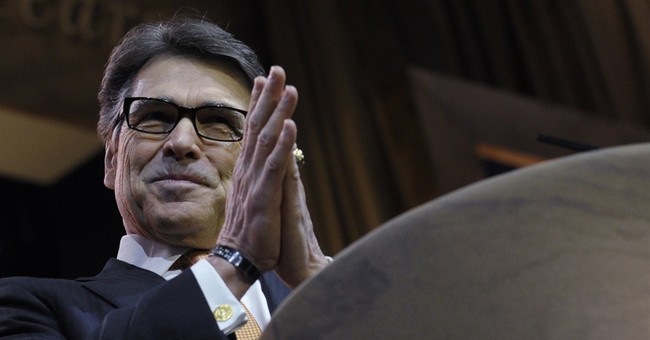 Perhaps no state claims the sense of pride that is evident in Texas. Author Mark Davis talks about this shared sentiment in his new book "Lone Star America." This week, he spoke with Townhall about how Texas is excelling and taking the lead on just about every issue from jobs to energy to the Second Amendment. He shared some insight into policies that allow Texas to thrive economically, as well as his thoughts as to which Texans could be in the White House in 2016.

Why write this book now?

In 30 plus years of doing radio talk shows, conservatives always have the same questions: ‘What’s the best kind of leadership? How can we get to smaller government? How can we convince people that low taxes are a good idea? Or sensible regulation? Government closer to the people?’ All those good, conservative questions. For the last 20 years, I’ve had the joy of living in the state where I was born where all of these things actually are happening and they are actually working. So, the field of candidates in the 2014 elections, and a field of presidential candidates in the 2016 elections, are all going to get out there under the Republican banner and make various points about why conservatism is good and why it will work. The evidence of it is right here in Texas and has been for these past 20 years. We are a shining example of how conservative policies can lead to growth and prosperity and success.

What kinds of policies allow Texas to have such a thriving economy?

It’s easy to go first to the notions of low taxation and sensible regulation and those are good nuts and bolts reasons why our state is doing well and why we are growing while America is stumbling. But, it’s a deeper answer. It’s about the spirit in the way our state is run. We hold up high the notion of individual rights, self reliance, not turning to government to attach ourselves from cradle to grave. Texans, by and large, view the role of the citizen as to do what we can do with our talents. To work hard, and have government exist only to prevent chaos, only to provide for our basic needs, only to provide a system of laws that maintains order. Beyond that, we want government to stay out of our lives so we can rise as far as we can go. Or, if we stumble, we stumble, learn from that and move on. It is the opposite of almost every lesson that liberalism teaches.

I spoke with Rep. Kenny Marchant (R-TX), who said that Texas is not the place to go if you want to be on welfare. Why is that?

Texas has the same humanitarian concept - the caring for the truly needy that any society should have. But, we are governed by a sense of ethics that says you don’t want to be on the public dole for the rest of your life. That is one of the things that made our state great - the story of the birth of our state. People coming here, working hard, and crafting this magnificent land from some very rough territory. That took a strong work ethic. That’s the kind of thing that made America great - a strong work ethic. We’re going to do everything we can to our maximum effort to make a great state. We’re going to do everything we can to make a great country. The last thing you want to do is set up a framework of government reliance - a culture of dependency that sucks away people’s desire to work, that erodes their sense of self-worth. The better way to do this is to create an environment where people can come in and succeed, work hard and see the fruits of their labors. So, there are places in America and places around the world where you can absolutely go and the government will take care of you for the rest of your life. You don’t have to do much to earn that kind of care. That’s not the way Texas is run.

A lot of people, when they think of Texas, can’t help equating it with guns. What are some of the misconceptions about Texans and their guns?

The misconception is that somehow our embrace of gun culture makes us a less safe state. The opposite is quite true. We have concealed carry - we have open carry. The resulting lesson is that criminals probably think a little more deeply about committing crime in our culture than they do in any part of the state that has a lot of gun-free zones. Guns don’t kill people, gun-free zones kill people. The image of Texas as a gun-embracing state is accurate. We have more gun ownership here than most other states. A ton of our residents have more than one. One of the great answers to a recent poll came in a question asking how many do you own. Some said ‘none,’ some said ‘one,’ some said ‘two to five,’ some said ‘more than five.’ A good percentage of the respondents in that poll said essentially, ‘none of your business.’ What a perfect Texas answer that is. Because, not only do we believe in the right to own guns, but we believe in the right to own guns without the government messing around with us - even knowing when we acquire them, or how many we have, because we don’t consider that to be government’s business. We are a safer, saner society because we are the Second Amendment. And we spend our days cherishing that amendment, knowing that without the Second Amendment, the rest of the Bill of Rights aren’t worth a nickel.

You said that Texas challenges the environmental “alarmists.” Could you explain this?

We love our land, we love our air, we love our water. We want to live in a clean state and a clean country. But, we will be damned if we will allow extremists and tyrants from Washington to tell us how to get there. I trust Texas environmentalism, which I call high regard for the land and a proper balance between keeping the land pristine and allowing human productivity. The environmental extremism of the current federal government and other administrations at times has led to job-killing initiatives that favor the environment at the expense of human productivity. There’s no one in Texas who wants industries to run rampant over the cleanliness of our air and our water. We want to be able to live in a clean state and have clean water, clean air, and we’re doing a very good job of that, while doing regular battle with the EPA. Our big belief is, returning to the very closely held notion of states’ rights, that every state should be allowed to be able to craft its own environmental policies, but that there should not be much federal oversight at all and if Texans are left to our own devices, we will have a thoroughly clean, and wonderful and enjoyable and livable state and will actually have job creation too.

How likely is it that our next president will hail from Texas?

From the Republican Party, one of the most talked about names is Ted Cruz and one of the guys out there doing the most to make people think he’s running, is Rick Perry. So, you take those together, Perry and Cruz probably occupy fully 25 percent of the presidential buzz right now, as Chris Christie’s star fades and other people are just sort of operating on a second tier. It’s impossible to read minds, and neither gentleman is going to telegraph in the summer of 2014 what he’s going to be doing for a presidential campaign, but I’ll tell you, as soon as the midterm elections are done, anybody thinking about running for president had better have a campaign up and running. The interesting thing about Governor Perry is that some people feel that he might have come in late and he wasn’t seasoned enough at the presidential level. He’s certainly seasoned now, he’s certainly prepared now. He just wrote an op-ed in the Washington Post taking Rand Paul to task on isolationism and foreign policy and the war on terror. He is clearly marking out territory. It goes way beyond Texas issues and even way beyond states’ rights, on which he is perhaps our foremost champion. This is not a guarantee that he will run. Maybe he’s just setting himself up to write more good books after he finishes up being governor in January 2015. But, if he were to run, I can guarantee you it would go better than it did in 2012. He will guarantee you that, and he will be right. Will he be the nominee? I have no idea. Maybe his fiercest competition would come from another Texan, and that’s Ted Cruz, who is the proper recipient of an enormous amount of love, admiration, even hero worship among conservatives, because he will step out with a courage that few other people have. Does this translate to a desire to be president? I don’t know. The feeling I get from Senator Cruz in talking to him is that he loves legislating, loves being in the Senate, loves being one of the most significant politicians in America right now, without having to endure the meat grinder of a presidential campaign. He may well want to stay right where he is, but if he decides to run for president, I know a ton of people who’d be enthusiastic about it - and I would be one of them.

Did the RNC miss out by choosing Cleveland over Dallas?

I actually kind of called this. I won’t have a ‘I told you so.’ But, the arguments were, ‘the Dallas-Fort Worth area is just a better place to hold a convention in Cleveland - and that’s true. That Texas is just our area and our state is more Republican-friendly than Ohio - and that’s true. And thirdly, how wonderful would it be to have a Rick Perry or Ted Cruz nomination take place on Texas soil - and that’s true. However, none of those things were the deciding factor. The RNC going to Cleveland - you have to remember where Cleveland is - it’s in Ohio, an enormously important state. I have no idea whether holding a convention in a state is worth one or two or five percentage points come November of the election year - it’s probably not worth a thing. It allows a lot of Republicans to go into Ohio, be heard in Ohio, say nice things about Ohio. It was probably a PR move. And I don’t disagree with it. Texas is going to do just fine. We get plenty of convention business.