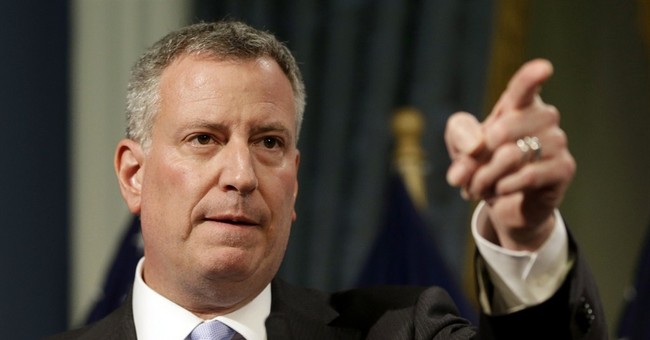 A NY Daily News headline boasted that New York City Mayor Bill de Blasio's new budget will add 200 police officers to the streets. What the title failed to mention, is that these officers were already on the force, and are simply moving from desk jobs to the street and public housing. It isn't until later in the article we discover City Council Speaker Melissa Mark-Viverito's initial proposal, which would have added 1,000 new officers to the often dangerous city streets. Instead, De Blasio's $75 billion budget is complete with a much more progressive agenda that faced few political obstacles with a Democratic-controlled city council.

After choosing not to hire new police officers, here's how De Blasio and the council decided to deal with "public safety":

The city also will spend more money on a series of steps, from speed cameras to speed bumps, aimed at reducing the number of pedestrian deaths. And more resources are being devoted to the city’s public housing system, particularly to improve security after a recent crime spike.

The mayor can think he's doing the city a service by installing this fancy new technology, but many opponents see these cameras as little more than speed traps, leaving drivers with hefty fees and an even more bloated government.

WNYC.org conducted an analysis to find that most of the car crashes in New York occur at 4 p.m. Considering that state law requires speed cameras to be shut off an hour after school ends, (roughly 4 p.m.), they therefore fail to help with traffic control at the most important and apparently most dangerous time of the day.

De Blasio opted not to add the new officers because he believes the current New York Police Department headcount of 35,000 officers is "adequate to keep crime low." , noting that New York's crime rate is improving. Two of the only three Republican council members, Minority Leader Vincent Ignizio and Steven Matteo, however, were unconvinced. They released the following statement:

“We appreciate Speaker Mark-Viverito’s leadership and our Council colleagues for joining the fight for new police hires. However, we are extremely troubled by this administration’s unwillingness to compromise on this crucial public safety issue.

The alarming rise in shootings and the spike in crime in public housing and in our borough are evidence that an infusion of new officers is sorely needed,” they added.

Other items that appeared to be higher on the council's agenda than public safety included more access to libraries and (surprise), pay raises for teachers unions. You're telling me out of that $75 billion they couldn't spare some pennies to put a few more cops on the street?

Perhaps the lengthy drought in New York Democratic leadership happened for a reason.